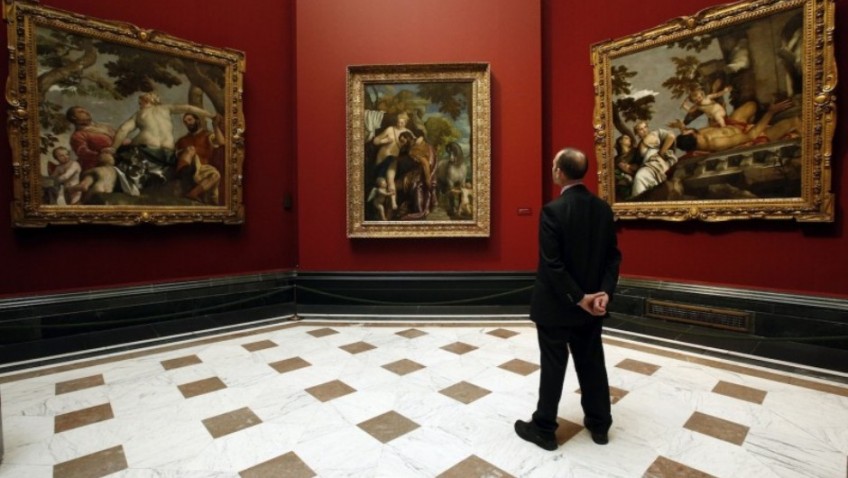 With museums closed, and no opening dates in sight, there is nothing quite like a re-release of National Gallery [reviewed January 9, 2015] to make art lovers feel right at home and everyone aware of what they are missing. Frederick Wiseman was 84 when he made his 39th documentary, National Gallery, and it is one of his best yet. Clocking in at 3 hours, but breezing by, it is perfect for these long days in lockdown. The film soars beyond the confines of a documentary and becomes both a behind-the-scenes tour of London’s superb National Gallery and an engrossing art history lesson.

The gallery is documented by Wiseman’s unique lens, without narration or music. His style has been copied, but no one can do it like Wiseman. Art lovers are treated to a behind-the-scenes look at museum management issues; the painstaking task of restoration; visits to organised classes and absorbing public talks before selected masterpieces. The classes and talks are carefully selected to demonstrate the wide range of activities the gallery offers that we would never know about.

The film is also organised around three major exhibitions which take place in the purpose-built Sainsbury Wing, while Wiseman is filming. We see some of the superb, Turner Inspired: By the Light of Claude (which points to a huge gap in Mike Leigh’s film); Leonardo da Vinci: Painter at the Court of Milan and Metamorphosis: Titian of 2012. Wiseman captures the crowds queuing in the cold outside the Gallery as well as the faces of ticket holders lost in thought before the master’s masterpieces. We benefit from a talk about the Gallery’s The Virgin of the Rocks, one of two Leonardo painted that remain a mystery to historians despite an in-depth technical probe during a recent restoration.

And as if to stress that art is, above all, about the power of imagination, we see a group of visually impaired adults absorbed in a Braille version of Camille Pissarro’s 1897, painting, Boulevard Montmartre at Night. Pissarro’s painting, an inventive display of the play of city lights on the dark, wet boulevard, is intentionally unclear. Nonetheless, the “students” approach the painting through its diagonal structure, and we “see”, with them, how all the lines form diagonals that meet at the furthest point of light at the top of the painting.

Wiseman cuts abruptly between areas and activities to suggest the simultaneity of the Gallery’s activities, transporting us in medias res to a meeting, class or lecture. A guide sits on the floor with a group of school children explaining that, unlike a film, novel or play, a painting has to tell its story in the speed of light. It has only one chance. He asks the children to speculate as to why, in Bellini’s St Peter Martyr, the woodcutters take up so much of the canvas when they are not mentioned in the original biblical story.

What we do not learn about Peter Paul Ruben’s masterpiece, Samson and Delilah, might not be worth knowing, which is just as well as a Ruben’s exhibition is about to open at the nearby Royal Academy. The first time we visit the painting, a dynamic female guide describes the setting so vividly the characters on the canvas seem real. She invites the group to put themselves in Delilah’s place. Time and again Samson has refused to tell his secret, but after sleeping with Delilah, he has done so, and the Philistine soldiers are in the corner, waiting to enter the room. Delilah’s expression is not, however, triumphant, and there is that tender hand on his slumbering back. She backs away as if to distance any feelings of betrayal and remember only that he is the enemy.

Wiseman often divides a talk on a specific painting into two segments, and when we revisit Samson and Delilah, a male art historian reminds two students, guests or trainees, that the painting was intended for a specific position in his patron’s house. Rubens designed the light in the painting to reflect the actual source of sunlight from the room’s windows. The ancient candle blows from the slight breeze through the early 17th century window.

We are treated to a fascinating talk on the challenges of restoring a Rubens and learn that months of painstaking restoration work is wiped away when the painting is cleaned. All responsibly carried out restoration now takes place on the varnish to preserve the original condition of the painting.

We are flies on the wall of two revealing staff meetings in which the departing Director, the erudite Nicholas Penny, fights off the trend to aim for the lowest common denominator or subject the Gallery’s façade to commercialisation. Whether it is a coincidence or not, the release of Boston, Massachusetts born Wiseman’s film corresponds to the Gallery’s first acquisition of an American painting: New York City artist George Bellow’s atmospheric, Men of the Docks.

The film ends unusually, but fittingly, with a pas-de-deux choreographed by Wayne Macgregor created to be danced in situ, in dialogue with the two Titian Metamorphosis paintings now co-owned by the Gallery that will always be exhibited together. Macgregor was one of three choreographers commissioned by the Royal Opera House and the National Gallery to create ballets to celebrate the Gallery’s (in conjunction with Scotland’s National Gallery) acquisition of Diana and Callisto, the companion piece to Diana and Actaeon.