Home / LIFESTYLE / REVIEWS > / FILM REVIEWS / Enlightening and beautifully presented, we see how Easter is resurrected through centuries of masterpieces. 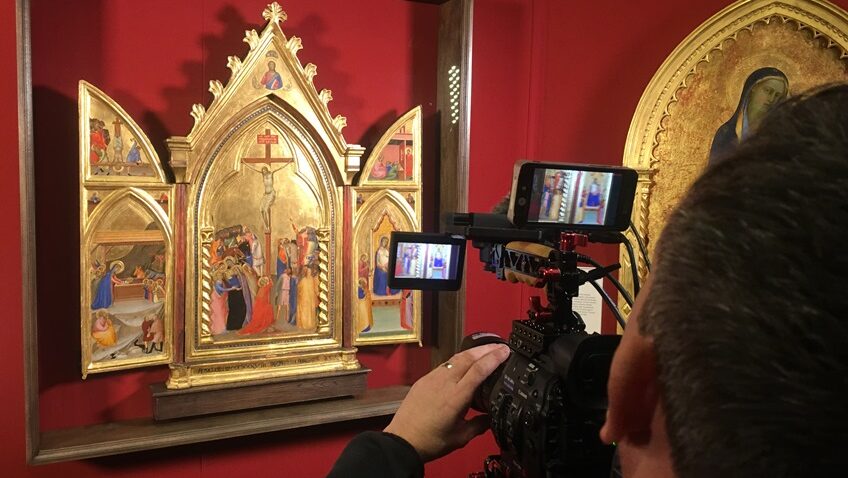 Enlightening and beautifully presented, we see how Easter is resurrected through centuries of masterpieces.

Director and co-writer Phil Grabsky usually brings us exhibitions of one painter and/or one exhibition, but in Easter in Art dozens of the western world’s great artists working in Christian nations throughout history are represented. In an unusual, but enlightening format, we are reminded of the entire story of Easter as written in the Gospels, of Matthew, Mark, Luke and John, with dozens of gorgeous illustrations.

This is only fitting as one of the most important aspects of understanding images of the Passion is the relationship between the word and the image. For centuries artists have been giving “the word” their own visual manifestation. Their commissions were to do just that, for the benefit of the clergy, wealthy donors, and the illiterate masses.

As one of the film’s three experts, Dr David Gariff from the National Gallery of Washington, tells us, Renaissance painters especially began to create cycles of frescoes on the walls of religious institutions, one of the most famous being Giotto’s (1303-1305) in the Scrovegni Chapel in Padua. The stories are displayed the way a film editor would construct a film and the analogy is apt as this was the ultimate form of communication of the time.

Giotto’s was a hard act to follow, but nearly two hundred years later Leonardo da Vinci painted one large fresco of The Last Supper in the refectory of the monastery Santa Maria delle Grazie in Milan. Its location was chosen to remind monks of Christ’s sacrifice and of his disciples, as they sat down to dinner.

Grabsky’s format is also clever, for, as the film’s three experts, Dr Gariff, the Times’ art critic Rachel Campbell-Johnston, and Dr Jennifer Sliwka, from Kings College, London, emphasise, Easter is the most important festival in Christianity, and it is the most illustrated story in western history. And the story has themes that the layman can identify with such as love, pain, suffering, faith, betrayal, and hope.

From the Middle Ages through to the Renaissance, art was predominantly religious. So this is not only a history of Easter, but a history of Art. The story starts with Christ’s activities that earned him the name of the King of the Jews and a following that irritated the Jewish establishment (as written in the Gospels). The main event was the Cleansing of the Temple, illustrated by, among others, El Greco in 1570. Reprimanding the scribes and chief priests, Jesus points out, “Is it not written” that the Temple “shall be called a house of prayer, but you have made it a den of robbers?” He then starts smashing things up and chasing people out.

From then on, the Parsees, high priests and councils want revenge. They are portrayed as monsters rioting until the governor, Pontius Pilate, who keeps declaring that this man has done no crime, has no choice but to crucify their nemesis.

The Last Supper, is, of course, a Passover Seder, and many artists have had a go at the subject, including the nun Plautilla Nelli, the first woman to paint the subject 450 years ago, and the only woman in the roster. Instead of fervent Catholic Andy Warhol’s Last Supper, made at the height of the Aids epidemic, we get Salvador Dali’s gaudy 1955 interpretation (a private commission), representing the 20th century. Skipping ahead in the story, Caravaggio’s dramatic Supper at Emmaus (1601) and the Master of Cappenberg’s (1525-1530) Christ Before Emmaus, with its men in bright tights, make up for it.

To bring Jesus to justice he has to have committed a crime (he was framed, Putin style, for stirring up the mob) and he has to be identified – hence, betrayed. Giotto has a beautiful fresco of Judas’s betrayal, and other masterpieces are shown, focusing on Judas’s kiss and Jesus’s admirable warning to his vengeful disciples, “Put your sword in its place, for all who take the sword will perish by the sword.”

Dr Gariff points out that it was imperative that Jesus, who lived as a man, died as a man. As a result we are shown some two dozen masterpieces that show, in graphic detail, his betrayal, mocking, torture, and death. The idea is that the congregation identify with Jesus, and as human beings, we naturally insert ourselves into the story. The best painters found techniques to make their art speak directly to our human condition and to human frailty.

The narration reminds us that there was, if the outcome were not so horrific and tragic, an almost comical game of pass the buck going on as the Parsees et al dragged Jesus around to various authorities hoping to off-load him. The first stop was the High Priest Caiaphas (Christ Before Caiaphas by Giotto and also by the Master of Guillame Lamberg of 1480-90), who sent him to the governor, Pontius Pilate (The Master of Beighem Alterpiece, 1520-1540, and Rembrandt’s gorgeous print of 1636). Jesus was a football passed from Pilate to Herod (Christ Before Herod by Antonio Ronzen 1517-20) and back to an exacerbated Pilate (Jacobo Tintoretto (1566) and Albrecht Dürer (1512)), who literally washes his hands of Jesus’s blood.

Images of The Crucifixion and Deposition (Rembrandt’s Descent from the Cross receives an interesting analysis from Ms Campbell-Johnston) are more numerous than images of the Resurrection, which is where Easter comes in. However, the story is particularly triumphant when it comes to the Resurrection as Christ gives the slip to the Centurions guarding the sepulchre and proves the mocking priests wrong when they call Jesus a fraud.

And there are no shortages of dramatic paintings of the Entombment, such as Tintoretto’s (1550-1560) and Rogier van der Weyden’s (1460-64). Michelangelo’s early unfinished Entombment is innovative for the way the body is held upright by the sacred figures, as though presenting Christ to the viewer. His feet which are not touching the ground as though floating up, and his perfect, muscular body, might look ahead to his resurrection three days later.

The film focuses on medieval and Renaissance depictions, although the 19th century is represented by a Delacroix and a Manet. My only complaint is the omission of Graham Sutherland’s powerful 1961 No Me Tangere in Chichester Cathedral.