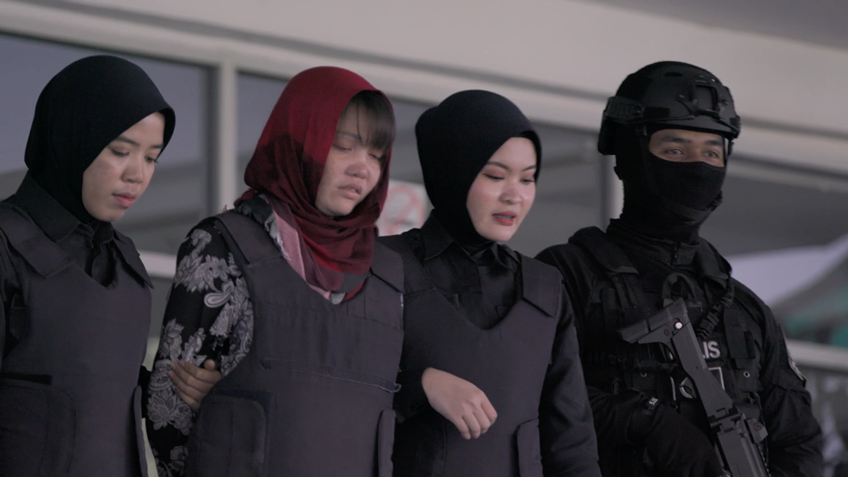 In the annals of audacious acts of state sponsored murder, the assassination of North Korean despot Kim Jong-un’s exiled half-brother, Kim Jong-nam, takes the prize. By comparison, President Putin’s poisoning sprees are so unimaginative, obvious and old hat. And they lack that touch of cynical sadism by which two clueless young women are framed for the murder and spend a year on death row.

That is not a spoiler, and not just because you can look up the outcome if you have forgotten the news story of just three years ago. It is not a spoiler because the film does not remain a murder mystery for very long. The title, Assassins, takes on a darkly ironic tone early on in Ryan White’s meticulously researched and enthralling chronicle of the most bizarre assassination in recent memory.

The irony hits when we meet the assassins. Doan Thi Huong is an attractive 28-year-old Vietnamese farmer’s daughter who travelled to Hanoi by herself to get a degree in accountancy. When she could not find a job, she spent three years as a waitress (according to her police report), but dreamed of being famous, “like an actress.” Then one day, two months before Kim Jong-nam’s assassination, a colleague asked her if she wanted “to work for a company making funny videos.” She was astonished when she asked for $1,000, they agreed.

Siti Aisyah is a now 25-year-old Muslim woman from Rancasumur, Indonesia who left school after 6th grade to toil in a Jakarta clothing factory to send money back to her family. Pretty and hard-working, at 17, she married the boss and had a son, but continued working 16-hour days until their divorce when her in-laws took her son. Leaving provincial Jakarta, Siti travelled to Kuala Lumpur for better opportunities, and quickly learnt how to use her looks and youth to make a living as a masseuse. Although the job was well paid, she hated it. Enter a taxi driver named John. He introduced her to a Japanese guy named James who was looking for a girl to act in a video prank. Siti (apparently the only girl approached who consented) recalls, “I didn’t think the pranks were funny, but James said in Japan they are.” He paid me $96, and I thought, “that’s easy money.”

The film opens with a cluster of women in front of a Kuala Lumpur shopping mall taking selfies. Asia has embraced the selfie and self-videoing craze with sinister consequences. An anonymous friend of Siti tells White that the last time she saw Siti she was celebrating her birthday at the Hardrock Café (Kuala Lumpur). “Siti is really pretty and down to earth. She was always making jokes… She seemed really happy. We couldn’t believe that she murdered someone the next morning.”

Like a passage from the 2007 spy thriller The Bourne Ultimatum we follow the converging trajectory of Kim Jong-nam, living with his family in Macau, China, and the two video-performers through narration and CCTV footage until a tense countdown on February 13, 2017 when both women are assigned a new prank in the KLIA Airport. Each had been practicing the prank on real people, approaching strangers from behind and putting their hands, rubbed with a gel, administered by the minders, over the stranger’s eyes in a kind of “guess who.” On February 13, however, Doan is told by her new minder, Mr Y, and Siti, by hers, a Mr Chang, that a “new actor and actress” would be involved in this important video. The night before Doan was made to practice on huge soft toys to ensure she pressed hard and held for 3 seconds. “It will bring good effect to video clip” she is told. To look her best, she did her hair and make-up with special care. What neither woman knew was that on February 13, the gel on their hands would be the ddeadly nerve agent, VX.

Our clear-sighted guide through the lead up to the trial and the trial itself is Hadi Azmi, a journalist from Benar News, who must work extra hard to report the truth in Malaysia where “freedom of the press is limited [because] most of the big media agencies are owned by the government.” Hadi also reminds us that “Malaysia is one of those weird countries that has diplomatic relations with North Korea.” After a game of blame shifting, and a mutual banning of embassies, collusion between Malaysia and North Korea allowed a roster of North Korean criminal agents who we are introduced to – the fixers who were grooming the two women – to escape.

Anna Fifield, then Beijing bureau chief for The Washington Post is our guide through the North Korean Kim dynasty and the emergence of Kim Jong-un, the son of Kim Jong-il’s second marriage to power hungry Ko Yong -Hui. Although he questioned the legitimacy of a hereditary dynasty in a Communist country, Kim Jong-nam was expected to replace Kim Jong-il. But after being caught on camera with his family in capitalist Disneyworld, he was disgraced, and Kim Jong-un came into his own.

We hear from the helpless, baffled parents of the two accused and most notably from the women’s diligent lawyers. They are as frustrated and outraged as we are when the public prosecutor overlooks all the obvious evidence of subterfuge and concludes that, because the pranks were not funny and women were not touching their faces with their hands, they knew what they were doing.

A Malaysian trial proceeds in two parts, the Prosecution case, and if the Prosecution Judge does not acquit, the Defence case will follow. Siti and Doan sit out the long Prosecution case in a depressing prison where, although separated from view, they could talk. They were total strangers before their arrests and became close friends in prison. Siti tells us that she only learnt who Kim Jong-nam was when she returned to Indonesia. “I never imagined I would be involved in his murder. I feel sorry for him.”

Doan, returning to Vietnam, all dolled-up for the waiting news cameras, tells one reporter, “I think I want to perform. Like an actress.” The KLIA airport stunt, in which her LOL long sleeved T-shirt became famous, was quite the audition.

Remarkably, the reason Siti was dramatically released to the surprise of her lawyers, with Doan to follow later, has less to do with the strong defence evidence, than with top level negotiations from their respective embassies. That the Vietnamese and Malaysian governments doggedly intervened to free two foolish young women from impoverished families, and British wife and mother Nazanin Zaghari-Ratcliffe has been serving a full five-year sentence, on less evidence, and more absurd charges, might owe something to then British Foreign Secretary’s Boris Johnson’s disastrous intervention in 2017.