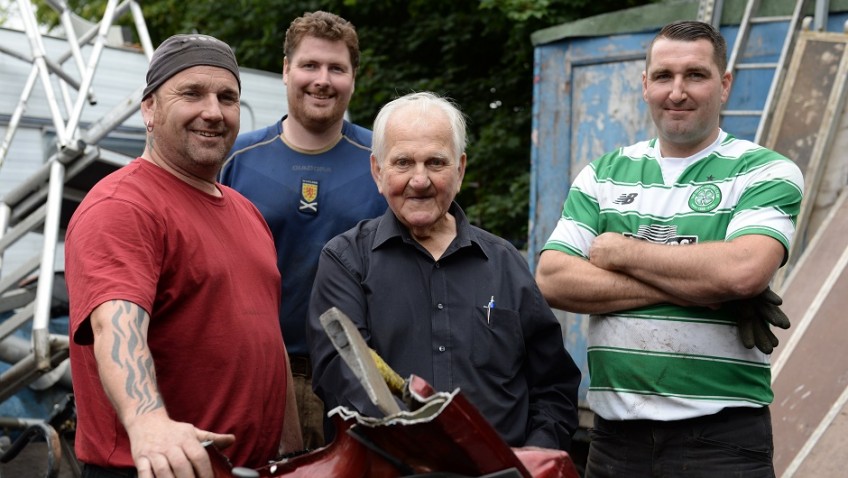 A great-granddad who is about to turn 90 still works six days a week at his family business – and won’t retire because he “couldn’t just sit at home”.

Rudi Stetz is the proud boss of his family’s scrapyard and says work is a “way of life” for him.

And he has no intention of slowing down – despite turning 90 on August 15.

“I couldn’t just sit at home.”

His son, Hans, has revealed his dad is an inspiration to him.

He said: “His work ethic has always been the same.

“It doesn’t matter if business was bad, he always gets through those times with the same attitude – get out and get the work done.

“He still loves what he does.”

Rudi works at Gourock Waste Metal – his own business – and is a devoted family man.

He has seven children – Marrianne, Ingrid, Christine, Barbara, Rudi, Rosalind and Hans, as well as grandchildren and great-grandchildren.

Hans added: “Hans said: “We have a close knit family, all because of him.

“Everything revolves around his family. His grandson is also called Rudi because he was born on the same day as him, in 2014.”

He added: “At the beginning there were crowds of young people who came along and I also started the first girls’ team.

“They were a terrific side – they used to thrash the boys.

“The YAC grew bigger and bigger over the years and we even appeared on ‘It’s A Knockout’ twice back in the 1970s.

“That was a big deal as it was the biggest programme on the TV at the time.”