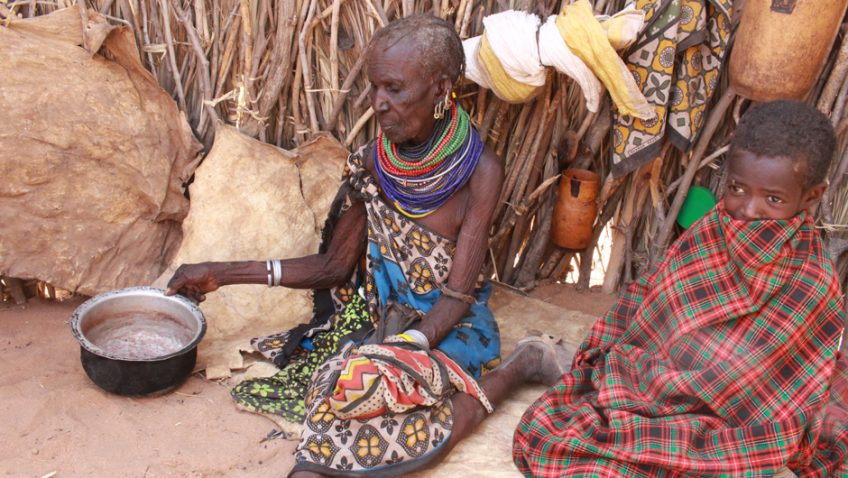 “They’ve survived hard times before, but we mustn’t forget the older victims of the East Africa crisis”

Saleh Saeed, CEO of the Disaster Emergency Committee (DEC), reports on the situation for older people in East Africa as hunger takes a grip across the region.

“This drought is very severe. I can’t remember the last time it rained. It is worse than others before,” says Marakhan Ayangan. At 73 years of age, Marakhan has a lifetime to put what is happening in his homeland of Turkana, in Kenya’s arid North-West, into perspective. “It has killed all our livestock. We depended on them to live.”

Marakhan’s age makes him more vulnerable at times of drought. He is less able to travel the long distances to where food and water might be more plentiful, and less able to carry the heavy aid parcels provided by humanitarian agencies. Older people may also be more isolated and have fewer options when neighbours and relatives migrate to other areas.

Drought and conflict have left 16 million people on the brink of starvation across East Africa and people are already dying in South Sudan and Somalia. In Kenya, the government has declared a national emergency and Ethiopia is battling a new wave of drought following the strongest El Nino on record.

Studies in some parts of Ethiopia show that the rate of acute malnutrition is just as high among older people as that of children. Exact numbers of older people affected by the East Africa crisis do not exist, but they make up around 5% of the population, so with 16 million people close to starvation, we can estimate that 800,000 older people are among them. Older people need more protein-rich foods like eggs, meat and milk, as well as meals that are easy to chew and digest, to stave off malnutrition.

As one of 13 agencies in the emergency response launched by the Disaster Emergencies Committee, Age International is ensuring that older people caught up in the crisis are not forgotten. This includes assessing the needs of older people, repairing and improving wells and land-pumps and providing drought-resistant seeds.

In some cases, aid needs to come to them rather than the other way around. Carrying heavy loads, waiting in long queues and making the journey to collection points can be nigh on impossible for some older people. This is because they may be weaker, less mobile, living on their own or suffering a condition that people their age are more susceptible to, such as coronary heart disease or dementia. Ayanae Ebulon, who lives in Turkana county, is a case in point. The 72-year-old finds it hard to stand up because she is so hungry. She used to weave to make a living, but is now too weak to do so. Hunger has already claimed the lives of her son and daughter – their graves are next to the hut where she lives with her daughter-in-law and two grandchildren.

“Younger people have moved away to find pasture,” explains Ayanae. “Some have gone as far as Uganda but many have come back because their livestock died.”

Two of her young grandchildren, both aged around seven, have left in search of food. “My two grandchildren walk to Lodwar and beg to get money for us. Some days they will get some money and will be able to bring home some food. Then we will eat. Other days they won’t get anything so we won’t have anything to eat. I don’t know if I will be able to eat or not one day to the next.

Like Ayanae and Marakhan, Eyanae swears this drought is worse than any before. Their age and their wisdom binds them together, as does their vulnerability.

“Sometimes,” Eyanae says, “when we see dead animals lying on the ground we eat them. It’s not very nice but we have no other option.

“This drought is killing livestock and soon people will be dying as well.”