Home / TRAVEL / The Snows of Kilimanjaro 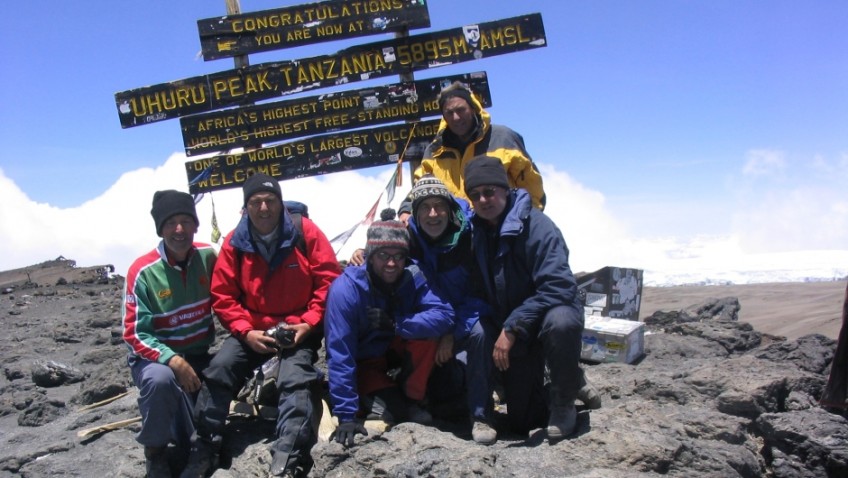 The Snows of Kilimanjaro

Soon after I retired a walking friend asked if I was interested in attempting to walk to the top of Africa. Mount Kilimanjaro is the crown of Tanzania and Africa’s highest mountain at 19345 feet.

At this height there is about half the oxygen of sea level and altitude sickness has to be treated with care. An exciting prospect, especially since I had not visited equatorial Africa previously, or climbed to anything of this height.

Kilimanjaro is a dormant but not extinct volcano with three volcanic cones. Kibo is the biggest, tallest cone with Uhuru Peak at its very top.

We were a party of six, four of us over 60. The trip was planned for the end of October, towards the end of the dry season according to our geography graduate member. We booked our own flights to Kilimanjaro International airport and were met by staff from the Marangu Hotel late in the evening. We woke to pouring rain: never trust a geographer!

Seamus one of the directors of the hotel who had sent us detailed instructions about clothing and everything else, gave us an excellent briefing, answered all the questions we had and then discussed the various routes for climbing Kilimanjaro.

We agreed on the Rongai Route and we would start the final ascent later than usual and camp overnight in the crater on Kibo. Altitude sickness was as the biggest fear. He said the seven days we had allocated for the ascent was sensible as too many attempt to do it too quickly not giving their bodies time to acclimatise.

He also strongly recommended we drink at least two litres of water a day. This resulted in much unzipping of the tent in the  night or packing a wee bottle!

We were next introduced to Gaudence, our chief guide, and his three assistants. Nineteen porters also came to carry all our equipment and food, put up and take down the tents and cook the first class meals. We only had to walk!

Thankfully by the time we had driven four hours to the entrance to the national park of Kilimanjaro the rain had stopped. We started walking to our first camp site after Gaudence had given us a short lesson in Swahili. He said we walk “poli, poli” and nobody overtakes him to ensure we walk “slowly, slowly”. He explained this will help us acclimatise. The walking was fairly gentle, always going upwards of course.

We left our campsite each morning with our porters packing it up and balancing anything up to 15kg on their heads. Before too long they passed us with happy smiles and cheerful greetings. When we had left the Marangu standing outside the hotel was a large group of disappointed men who had not been given portering job.

We spent five days trekking slowly, sleeping at night and climbing as high as Guadence considered safe. “Climb high, sleep low” is an agreed formula for helping your body to adjust to the high altitude. Towering in the distance and across a desert called the saddle was the huge cone of Kibo.

Since the second morning we had seen the white glaciers on its top glinting in the sunshine.  As we camped among the rocks we encountered other groups who had arrived by different routes.

The following morning at 4am we were the last to leave as the others left about midnight, hoping to achieve the summit at sunrise. The sun greeted us just before six. It was about this point the hard climbing started.

We were on loose shale and it was steep; the only way to advance was by zig zagging up the hillside, going “poli, poli”!  At 10am we reached the rim of the crater at Gillman’s Point, named after a British government official who trekked this way when Britain took over Tanganyika after the First World War.

The ultimate peak was further round the rim of the crater and 300 metres higher. Taking a gentle stroll after the climb, took us nearly alongside one of the glaciers which we had admired from a distance.

We had reached UHURU PEAK. at the top of Africa, nearly four miles above sea level.

After taking photos we continued a little further round the rim of crater where we could see three tiny dots of our tents. “Skiing” down the fine stones into took us into the crater where afternoon tea awaited us.

Altitude sickness did cause agonies for one of our party soon after we retired and he had to be walked down a very black mountain side by Guadence and a porter.

Seamus had warned us this would be a very, very cold night: it was cold but not excessively cold. When we got out of tents in the morning we discovered that we were covered in snow. In the early hours of the morning the snows of Kilimanjaro had fallen and the clouds that had given the snow had stopped the temperature falling as low as expected.

It was still cold and a bit uncomfortable so we left as soon as breakfast was over. We descended in two days through ice cap, alpine desert, moorland and forest, the four distinct zones of Kilimanjaro.

Back at the hotel we enjoyed a celebration with all our crew and Gaudence presented us all with a certificate to say we had made it to the top of Africa’s highest mountain.