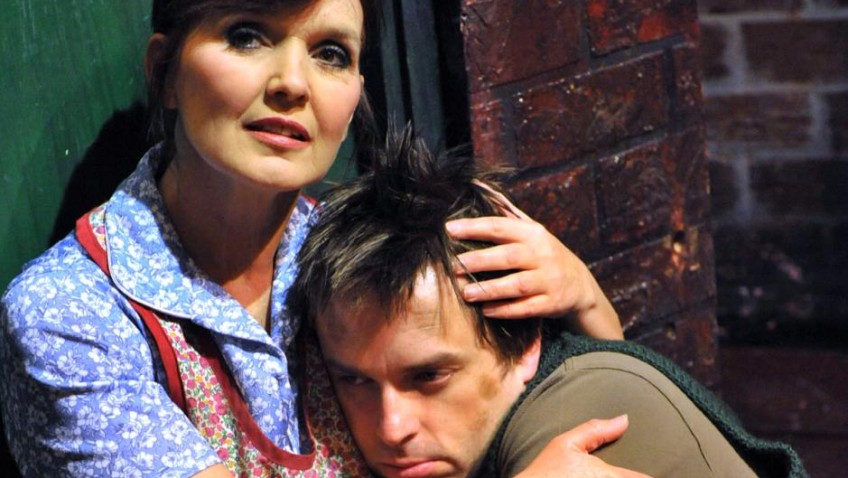 Willy Russell’s Blood Brothers has been performed at home and abroad for just about thirty years now, its Scouse translated into various improbable languages. Yet wherever it plays, the drama never loses impact, and even motley masses of youths who are studying the play at school still stand to keenly applaud. It’s all because this is a great piece of storytelling.

Tension and suspense grip from the start as the heart-rending tragedy of separated twin brothers, Mickey and Edward, unfolds, yet fun and joyous comedy are just as frequently at the forefront, all supported, from time to time, with song.

Sean Jones is a delight as Mickey, the twin destined to live with his struggling mum and many siblings in Liverpool’s world of rough, graffiti-ridden, red brick poverty. His transition is both admirable and poignant as his bouncy, loveable, comical, tear-away seven year-old (nearly eight!) performs silly antics with his vast, green, holey pullover and with spittle, then transforms into awkward adolescent before crumbling into a broken adult wreck. As brother Eddie, the twin with a more privileged upbringing, Joel Benedict (in his professional debut) is perfectly smashing in posh, grey shorts and long, grey socks, and equally endearing, while the interaction between the two is heart-warming.

Danielle Corlass is strong, too, as Linda, progressing from bouncy child to love-sick teen to careworn adult, while Maureen Nolan, the fourth Nolan to successfully take the role, lends her strong, deep tones to the songs of Mrs Johnstone, the twins’ long-suffering, stoical mother.

Lurking in the shadows throughout, biding his time, waiting to swoop at any opportunity, is (Wet Wet Wet) Marti Pellow the voyeuristic, be-suited Vulture of Fate, aka The Narrator. His fat vibrato woggling like a giant jelly in a hurricane, he appears, spectre-like, on balconies, at windows, side stage and centre stage, his long, lanky form and chiselled features looming out of the darkness, though it might be said he lacks the really deep, brooding, spine-chilling presence and menace that some actors bring to this role.

The use of synthesizer on a rather smudgy overture and at times for dramatic effect, and the overuse of echo (- echo! echo!) won’t be to everyone’s liking, while, with the piece at two and a half hours (plus interval), some of the songs (unlike Marilyn Monroe’s life, as the song might say) could be shorter, one feels.

But, without doubt, this story of personal tragedy, dotted, like life, with moments of intense fun and joy, that takes us back to a time when kids roamed the streets en masse, playing Cowboys and Indians, and when teachers and policemen felt free to clip them round the ear at will, is still an outright winner.

The play tours until May