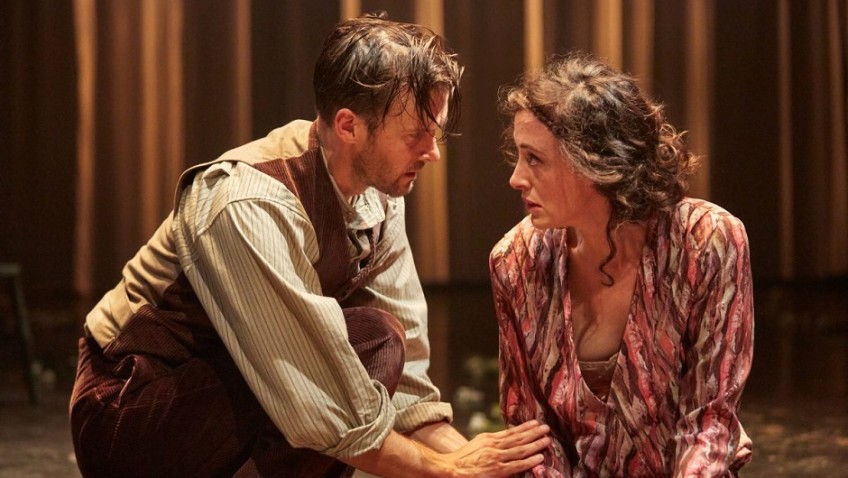 A co-production of Sheffield Theatres and English Touring Theatre

Regarded as obscene, DH Lawrence’s Lady Chatterley’s Lover, published in Italy in 1928, was famously banned in the UK until 1960. Since then, the novel with ‘unprintable words’ has become a timeless, best-selling classic. The book’s sexually explicit content and language that tell of burning lust and forbidden love caused massive controversy. Today, of course, ‘rude’ words, nudity and (simulated) love-making are all fine onstage and, in our less shock-able age, this might almost be regarded as an everyday soap-opera story of country folk.

But this is a story not just of physical love and lust, and the freedom to choose one’s own path, it’s also a touching, sensitive story of individuals struggling to make sense of life in the traumatic aftermath of the Great War. Sir Clifford Chatterley, paralysed casualty of war, has returned home, impotent, angry and frustrated, suffering from what we now see as Post-traumatic Stress Disorder but in an age when a stiff upper lip was his only option. His wife, trapped in a marriage without intimacy, physically and emotionally unfulfilled, must look elsewhere for fulfilment, which, to quite some extent, her playwright husband encourages.

Laura Hopkins’ set for this new stage adaptation by Philip Breen is sparse, reflecting the grim, grey mood of the Great War’s aftermath, where life is damaged and disjointed. The black floor is dotted with isolated, disparate props – chairs, table, wheelchair, piano – all initially enshrouded in ghostly dustsheets, while a vast, ghostly curtain forms the backdrop. This bleak, colourless isolation reflects the isolated loneliness of Sir Clifford, of his carer wife, the clipped, cool Connie, of Nurse Bolton who lost her husband to the pit many years ago, and of new gamekeeper Oliver Mellors, living alone in a cottage on the estate after bitter separation from a wife who threw him out on account of his brutal behaviour.

Snatched, fragmented scenes from their life, chopped off by darkness, pitted with clock ticking and type-writer tapping serve to reinforce this uneasy, disjointed, alienating atmosphere as do both the script and its stilted, awkward delivery. A pianist (David Osmond) works to inject Chopin’s passion and romanticism into the bleak gloom but it’s tough going. Things are nothing but grim on the political front, too, as the red flag of socialism is waved by armies of pitifully poor workers, formerly cannon fodder and now used by the wealthy ruling-class as equally disposable factory and mine fodder. Sir Clifford (Eugene O’Hare) sees it as his heartless, superior duty to keep the impoverished masses in their lowly place, through starvation if necessary.

This is a world where warmth, affection, passion and a zest for life are sorely lacking. So can this new infatuation of Lady C (Hedydd Dylan) for gamekeeper Mellors (Jonah Russell) blossom convincingly into a spiritual and physical togetherness of steamy romance?

Unfortunately, it’s nigh on impossible, when avoiding actual indecency and sensationalism, to convincingly convey onstage the heat and passion of lust, sensuality and sexual intimacy (thankfully, perhaps!) No matter how naked the couple, without some spark of special chemistry, passion can fall flat, heating up to a brief lukewarm at best. A multi-purpose black stage gives no real sense of place, either, which doesn’t help. As the seasons progress, the splendour and freedom in Nature and the outdoors, that should provide joyous contrast, are hard to conjure up even with copious plastic flowers and profusions of cuckoo, owl, pheasant and blackbird calls.

Yet some warmer, more touching and emotional moments do engage, as when Nurse Bolton (Rachel Sanders) movingly relates her husband’s death, or when Sir Clifford’s bitter anger finally breaks down into howling cries, met with maternal consoling from her. Between the lovers, the warmest, more engaging moments in the much shorter (phew!) second act come as welcome light relief when ‘Lady Jane’ and ‘John Thomas’ dance in circles, stark naked, under jets of ‘rain’ that streak from the Crucible heights (to land in strategically placed bowls). At last the pair are alive together, relaxed, warmer, softer, more tender. Briefly.

In general, though, unlike the clothes, this doesn’t quite come off.

The production plays at The Crucible until Oct 15th before travelling to Oxford, York, Malvern, Salisbury, Brighton and Cambridge.