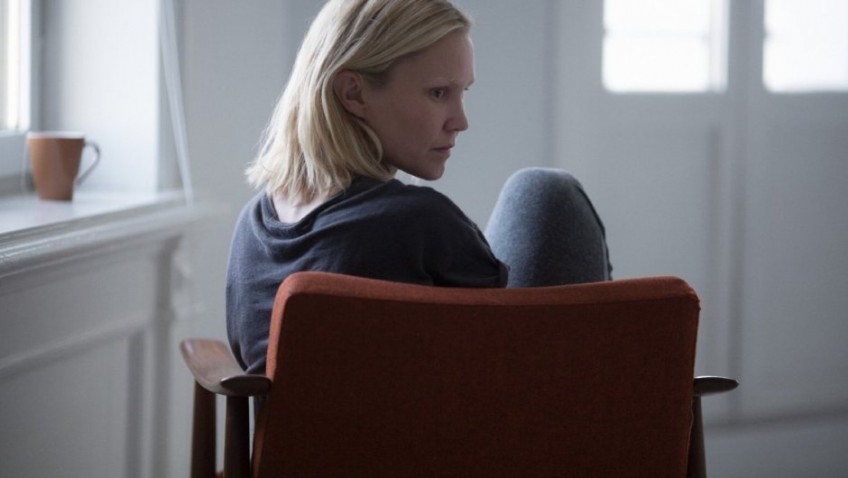 Anyone who saw Oslo, August 31st, will know that its co-writer, Eskil Vogt, does not like to spell things out or allow action and plot to distract from ideas, images and subjective experiences.   If you want to be spoon fed your popcorn with your brain on leave, Blind, Vogt’s directorial debut, is not the film for you.  If, on the other hand, you like a cinematic challenge, you will become intimately involved in a pretty, 30-something writer’s experience of blindness, as expressed through her fears, dreams and fantasies.

Since she lost her sight, Ingrid (Ellen Dorrit Petersen) does not go out. She tells her frustrated husband, Morten (Henrik Rafaelsen), who buys her a new dress so that she will accompany him to a reception, that she is not ready.  When Morten leaves for work, Ingrid makes a cup of tea, puts on her headphones, and sits by the window until evening, as though taking in the view.

This is not lost time, however, as Ingrid is busy creating an busy and entertaining existence through which she works out her fears, suspicions, longings, and feelings of inadequacy as a wife and sexual being.  We meet her duplicitous husband, and Elin, a blond divorcee (Vera Vitali), who is new to town. Lonely, Elin is into online dating.  One enjoyable dinner date ends in disaster and confusion when Elin suddenly goes blind.  The most curious character is Einar (Marius Kolbenstvedt), a sad, former friend of Morten who, unemployed and lonely, is addicted to hardcore pornography.

These fantasies, both funny and disturbing, are mixed with actual memories, for example, of Ingrid and Morten’s favourite restaurant.  Ingrid is determined to keep these visual memories as her objective reality, but for how long will she be able to see what her eyes do not?  Her other reality is touch, including sex. But Ingrid is too suspicious, insecure, and self-conscious to relax.  Is it Ingrid’s imagination or is Morten really in bed next to her having virtual sex online, confident that Ingrid cannot look over his shoulder?

Half way into the film we can no longer distinguish between ‘reality’ – that being what Ingrid is actually doing – and ‘fantasy’ – that being the life that Ingrid is inventing or dreaming.  In addition to her three characters, various locations, motifs and obsessions start to recur and we can almost work out a pattern replete with references to Ingrid’s concerns.

The climax of this intermingling of fantasy and reality seems to be Elin’s pregnancy and Ingrid’s pregnancy test.  Then again, how much of it is reality, we do not know.  Like watching a film or reading a book, we, like the auteur behind the film or book, have to use our imaginations.  The poet Wordsworth famously referred to the imagination as the ‘mind’s eye’, and it is that deep well of images that Vogt explores in Blind.