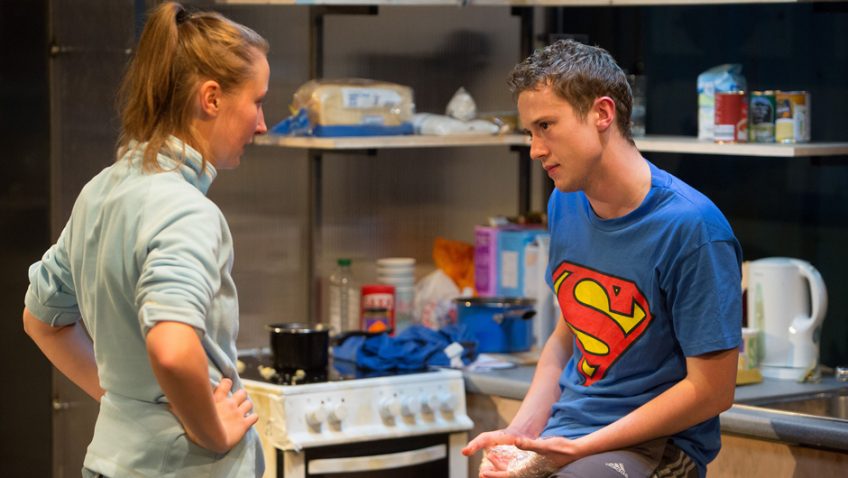 Matthew Xia’s production premiered at the Royal Exchange Studio in Manchester in 20 and has now arrived in London. The action is set in Milton Keyes. The traverse stage houses both the workplace and the home of a nineteen-year-old girl.

In the last month I have seen Alexander Zeldin’s play, Love, at the National Theatre and Ken Loach’s film, I, Daniel Blake.

Soper’s script is yet another depressing slice of contemporary life, totally convincing in its realism and social criticism.

You may feel you should be watching a documentary rather than a play. All three authors lambast the social service.

Tamsin works in a warehouse, doing a soul-destroying, unskilled job, packing boxes, on the clock to a ridiculous target, which she constantly misses. She works long hours and is poorly paid.

The firm’s mantra is: Work, Enjoy, Improve.  How ironic. The only enjoyment is when Tamsin sings a song, Meat Loaf’s “I Would Do Anything For Love.”

One or two moments recall Charlie Chaplin on the factory floor in Modern Times.

Doherty and Quinn are very convincing. So is Alexsandar Mikic as an essentially decent supervisor whose job is also on the line and which forces him to be more draconian than he would like.

Shaquille Ali-Yebuah convinces, too, as a fellow teenage worker, who is wisely getting out and heading for further education.