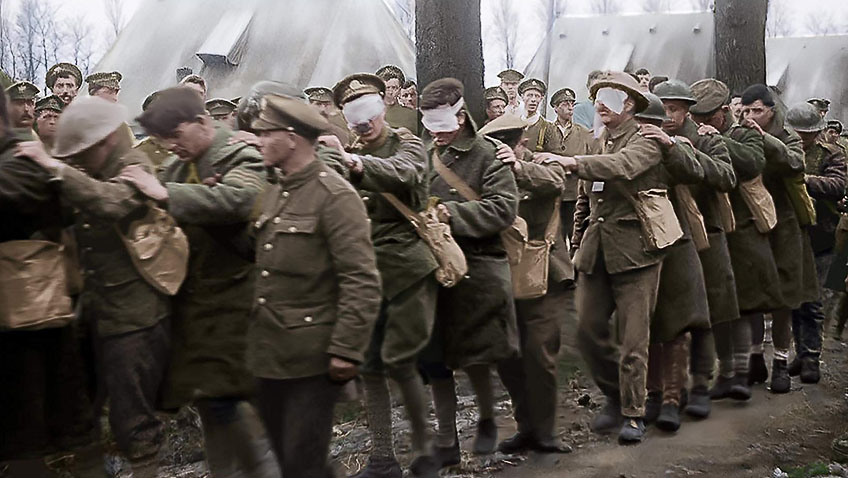 We will remember those who died in World War 1

They Shall Not Grow Old (Warner Bros Home Entertainment). Peter Jackson’s impressive documentary about the infantry on the Western Front during World War 1 draws on restored footage from the Imperial War Museum and the BBC plus the voices of the soldiers who survived. Every high school in the UK will get a copy. The colourisation of the footage, which I found disturbingly modern and making it less rather than more authentic, is presumably aimed at teenagers who do not like watching black and white films.

15/16/17-year-olds in 1914 lied about their age, gung-ho to enlist and shoot Germans. Once they got to the front lines all romantic ideas of war quickly vanished. The revelation was stark: a maze of waterlogged trenches, a desolate landscape of barbed wire, mud, stumped trees, walking wounded, decomposing bodies, gangrene, lice, rats, gas and the constant barrage of machine guns, exploding shells and mines. There were no latrines. The men lived and behaved like animals.

A surprise for many will be seeing the captured Germans working side by side with the British in the field hospital, tending the wounded. The truce in 1918 was an anti-climax. Some even regretted the war was over. The men came home to massive unemployment and to civilians who had no conception of the magnitude of what the soldiers had been through.

Red, White and Zero (BFI) is a 1967 British film in three parts which never got a release.

The Ride of the Valkyries directed by Peter Brook is a silent farce. An opera singer (Zero Mostel in full costume as Wotan), journeying by car, underground and walking, is late for his entrance at the Royal Opera House in Covent Garden.

The White Bus directed by Lindsay Anderson and scripted by Shelagh Delaney is a social commentary which is surreal and realistic at the same time. A young woman (Patricia Healey, totally impassive throughout) journeys from London to the North of England and goes on a guided tour of a bleak and soulless industrial city watching the working classes at work.

Red and Blue directed by Tony Richardson is a mini-musical. Vanessa Redgrave sings songs by Antoine Duhamel and is courted by Michael York, Gary Raymond and Douglas Fairbanks Jr.