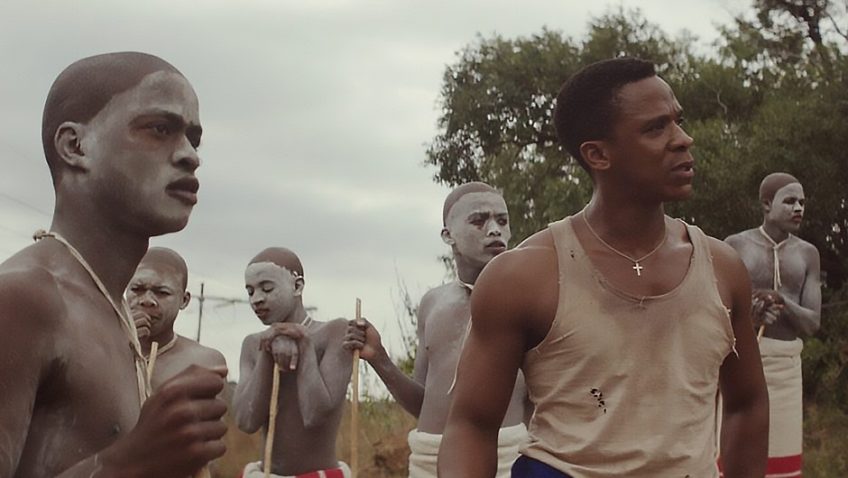 The Wound is at the cutting edge of manhood

The Wound (Peccadillo Pictures) is a South African film confronting the issue of circumcision of males between the ages of 18 and 25. A rich father in Johannesburg decides that his gay teenage son is too soft and needs to be toughened up. So he sends him off to a boot camp to put on white body and facial makeup and to be circumcised. John Trengove’s debut feature film observes this ancient, sacred and secret Xhosa initiation ceremony into manhood, a raw and very painful act. The wound takes two weeks to heal. The gay boy (Niza Jay), defiant and brave, wants to change Xhosa’s attitudes to homosexuality; and even more so when he discovers that his mentor (Nakhane Touré) is a closet gay who is in love with another mentor (Bongile Mantsai) who is also a closet gay. Trengrove and the actors have had to take a lot of flak from the Xhosa people since the film has been released.

Roman J. Israel, Esq. (Sony) gives Denzel Washington the opportunity to put on a frizzy wig, spectacles, shabby clothes, a shuffling walk, and he looks so unlike like Denzel Washington that he was nominated for an Oscar. He is playing an idealistic defence attorney, a moral provocateur, who lives in Los Angeles and wants to overhaul the justice system. But purity (as the script points out) can’t survive in today’s world and he does something very foolish and illegal. The character is so complex and quirky that he and the storyline never quite gel. Colin Farrell is cast as his boss and he looks the exact opposite, a very slick, very smart man who puts Money first. Dan Gilroy wrote the script and directed.

Jane Goodall: My Life with the Chimpanzees (National Geographic) is a documentary by Brett Morgan: a portrait and tribute to a conservationist, now in her eighties, the much-lauded Dr Jane Goodall who since the 1960’s had devoted her life to studying chimpanzees in the lush forests of Tanzanis’s Combe National Park. She was joined by a photographer who became her husband. She had no training, no degree; only an open mind, a love of animals and a lot of patience. She saw herself as a Dr Dolittle and a Tarzan. She lived among the chimpanzees and came to be accepted by them. Chimpanzees have human characteristics and can be as loving and as brutal as we are. The documentary ends on a sad note with the ones she particularly knew dying of polio and fighting among themselves. The score is by Philip Glass.