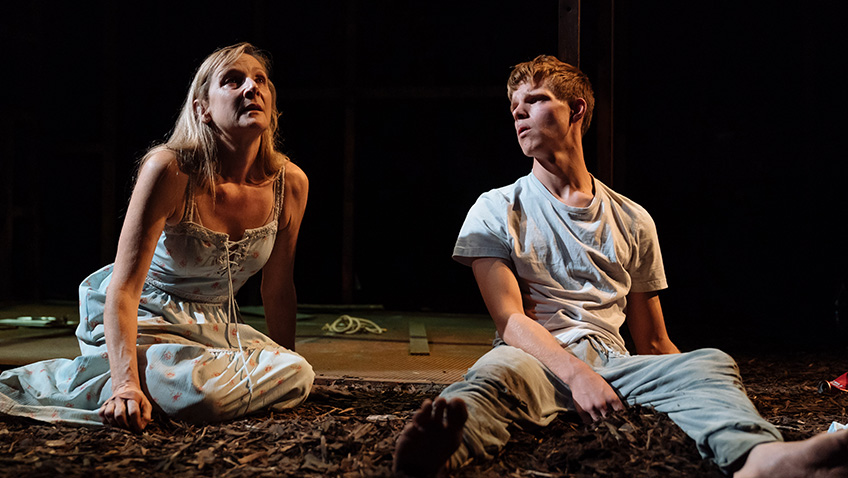 The theatre upstairs has been turned into a forest of bare trees. There are just two characters: a dirty, ragged, haggard old Woman (Lesley Sharp) and a Boy curled up on the floor. They live in a broken shed and are freezing. She behaves as if she is on drugs. 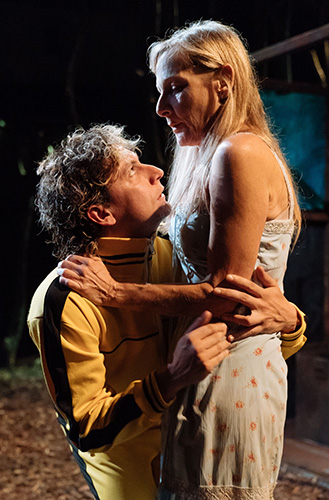 Tom Mothersdale and Lesley Sharp in The Woods

The lights go out and there is a terrible rumbling noise as if the whole world is crumbling.

The lights come back on and the two actors are discovered in different positions. There is then a quick series of images followed by instant blackouts. A modern kitchen high above the stage is occasionally lit. A baby cries.

Then suddenly there is a voice over the tannoy telling us to evacuate the building.

Many of us thought it was all part of Evans’s play until we ended up in the street, on the island in Sloane Square, and were having to wait. Finally we went back into the theatre. Evidently, it was a false alarm.

The Woods, directed by Lucy Morrison, set by Naomi Dawson and strongly acted, is a powerful play but not an easy one to grasp and audiences will be struggling. The printed text has more stage directions than dialogue and the dialogue is hard-going.

A strange man (Tom Mothersdale) with a Deep South accent enters and declares, “Aint no future. Aint no past. I just here now.” He is called Wolf in the cast list. No fairy tale set in a wood would be complete without a big bad wolf.

He rages against the old Woman. He says he is her son and he is seen in many guises, including cop, woman and doctor, and taunts her every time, saying she is not a good mother. His love is vicious. Is he real?

Is the Boy (Finn Bennett), mothered and spoon-fed by the old Woman, her son? Or is he the lost babe in the woods she says she found? The Boy lies on a sheet and is dragged around by her. Is the Boy dead?

Is what we are seeing all happening in the Woman’s fevered imagination? Will she ever get out of the woods? Or is she trapped forever in her mental illness caused by we know not what. Could it be post-natal distress? Has she had a miscarriage? Or has some tragic accident occurred in the home?