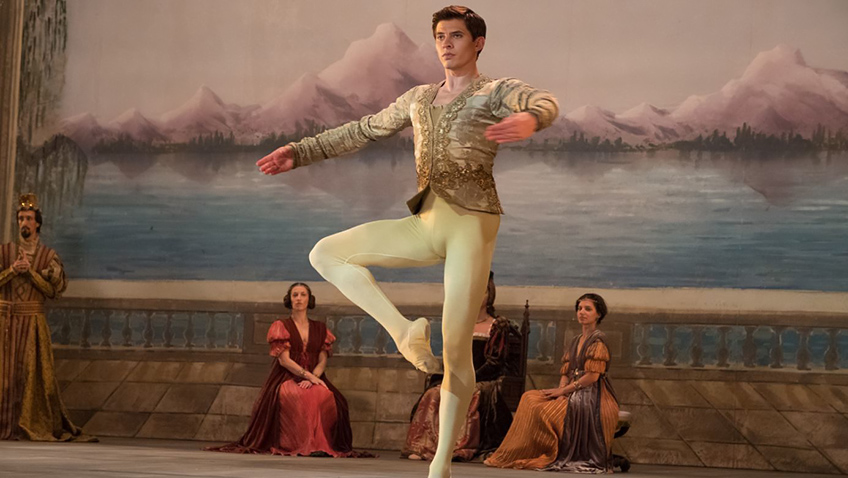 I want to be free! Russian ballet star defects from USSR

The White Crow (StudioCanal). In 1961 23-year-old Rudolf Nureyev is in Paris with the Kirov Ballet, absorbing the culture by day with visits to the Louvre and Notre Dame and clubbing at night, fraternising with the French dancers, much to the disapproval of the KGB. David Hare’s screenplay flashes back to his impoverished childhood in the Ukraine and his student days at ballet school in Leningrad where he comes under the tutelage and care of ballet master Alexander Pushkin (self-effacing Ralph Fiennes). Pushkin’s wife seduces him. Fiennes, who also directs, wanted a Russian dancer who could act. Ukrainian ballet dancer Oleg Ivenko, who has never acted before, impresses. He has Nureyev’s arrogance, aloofness and his hungry eyes. The clips of him dancing give his performance convincing ballast. The primarily Russian cast and the sub-titles give the film its authenticity. The scenes at Le Bourget airport – when Nureyev, with the aid of French friends, is able to escape from his KGB minders and famously defect – provide a tense and exciting climax.

Le sang d’un poète (StudioCanal). Jean Cocteau’s first film is strictly for aficionados. His surreal, fantastical and dreamlike autobiography was all the rage in 1930 with the avant-garde but nobody else. A poet draws a mouth which is grafted on to a hand and then on to a statue. The poet is persuaded to walk through a mirror. He enters a long corridor of locked doors. He peeps through a number of keyholes and spies a Mexican, a hermaphrodite and a woman attempting to thrash a little girl. The poet is handed a revolver and told to shoot himself. “I have had enough!” he screams and returns home to smash the statue to smithereens. Schoolboys have a snowball fight during which a boy is murdered and carried off by a black angel. The poet commits suicide whilst playing cards to the loud applause of high society seated in theatre boxes. The voice-over is Jean Cocteau’s.

Le testament d’Orphée (StudioCanal). Jean Cocteau’s last film, cobbled together in 1960, is a self-indulgent self-portrait, a low-budget, pretentious journey on foot through time, featuring classical mythical figures he had written about and staged. Cocteau dies to be reborn again on film. His famous friends – María Casares, François Périer, Jean-Pierre Léaud, Yul Brynner, Jean Marais, Pablo Picasso, Charles Aznavour, etc – rally round to appear in cameo roles. It is a pity that Cocteau should be such a bad actor and so boring on screen. You would be much better off watching his masterpieces, La Belle et La Bête (1946) and Orphée (1950).

In Safe Hands (StudioCanal). A baby is handed over to the state at birth by a college student who doesn’t want to be a mother. Director Jeanne Herry shows what happens next, the adoption process and the bureaucracy to find the best possible parent and home for an unwanted baby. I felt I was watching a documentary acted by professional actors who are cast as the doctors, midwives, social workers, foster parents and psychiatrists. The most effective and touching moments are those when the adults are speaking directly to the baby and making sure he knows he is loved. This French film could be useful for those who are childless and are thinking about adoption.