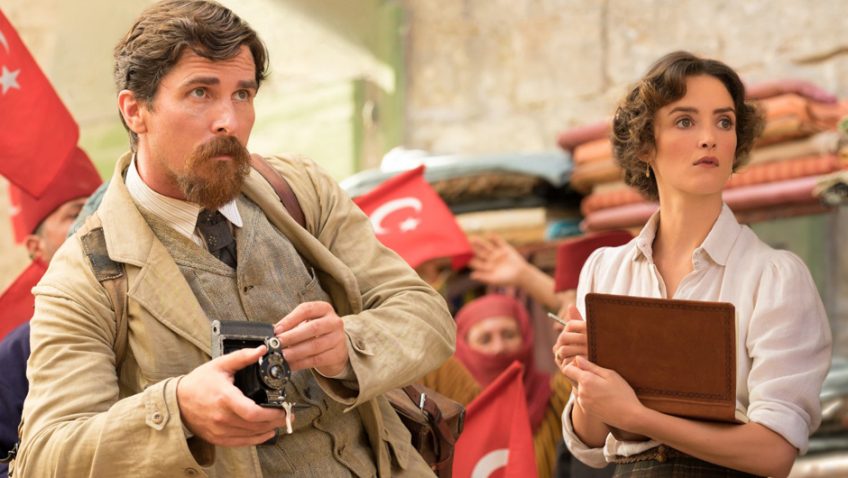 The Promise (Entertainment One). In 1914 there was systematic extermination of the Armenians by Ottoman Turkey. Modern Turkey to this day denies that the Holocaust ever took place. Terry George’s expensive epic wants to be another Doctor Zhivago but the film falls far short. The genocide images – the massacres, cold-blooded shooting, death marches, forced labour, starvation – are convincing. It’s the old-fashioned romantic triangle and the telling of their story which is not convincing. A young Armenian (Oscar Isaac), living in a small village, wants to study medicine in Constantinople but the only way to get the money to pay for his studies is to promise to marry a local girl and get her dowry. Whilst studying he falls in love with another woman (Charlotte Le Bon) who is already loved by an American journalist (Christian Bale) who is reporting on the atrocities.

Mindhorn (SudioCanal). Julian Barratt plays a has-been actor who had a big success in a TV series playing Detective Mindhorn and is now doing TV ads. He is invited by the police in the Isle of Man to reprise his role in order to catch a serial killer who is a fan of the series and thinks Mindhorn is a real detective. He accepts thinking it might re-launch his career. Barratt (best known for The Mighty Boosh

) is funny. Simon Farnaby as his former stunt-man, in the tiniest pair of shorts plus a Dutch accent, is funny. Barratt and Farnaby wrote the script. Best moment is when the killer is on the phone and the actor takes so long to get into the role of detective that the killer rings off. A Manx street parade, when the public is watching a real shoot-out and think the participants are acting, has potential. But neither the spoof action movie nor the so-called reality is ever really funny enough.