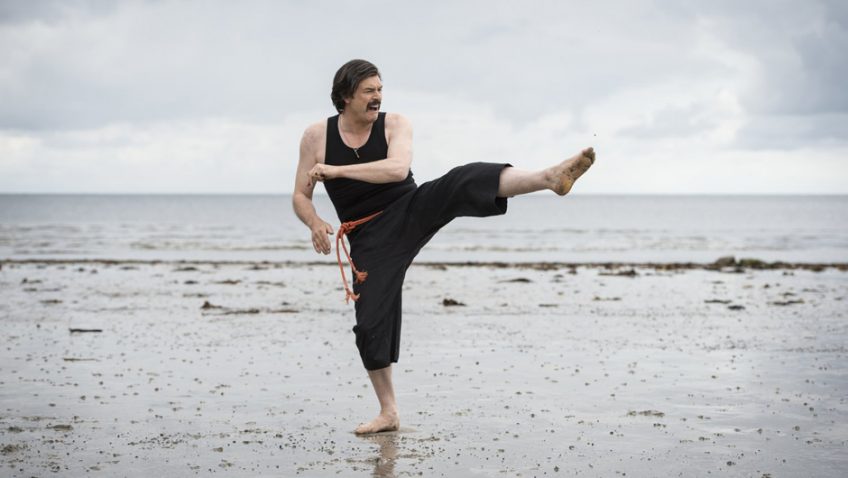 The Mighty Boosh co-star Julian Barratt (A Field in England) is in his element in theatre director Sean Foley’s feature film debut, the surreal farce Mindhorn

. Barratt plays Richard Thorncroft, the washed-out, former star of the hit television series Mindhorn who is given one last chance to relive his glory days on the Isle of Man.

is not only a spoof of 1980s TV detectives such as Bergerac and Magnum, P.I., but of show business and celebrity in general, epitomised by mega star Burt Reynolds’ financial nose dive and comeback attempt. Do not see this film if you are after a deep, existential experience and after dinner debate. Do see this film if you want to park your brain outside the multiplex and laugh harder than you have all year.

When the film opens, we see the arrogant, dashingly creepy Richard Thorncroft, sporting a Tom Selleck/Burt Reynolds moustache and his character Mindhorn’s trademark bionic eye that allows him to see the truth – which is how he catches his man. Thorncroft bends over a flashy car to plant a kiss on his ravishing on-and-off the screen love interest, Patricia Deville (Essie Davis). The rivalry with stunt man Clive Parnevik (Simon Farnaby) is evident early on, but the tables have turned when Thorncroft is summoned back to the Isle of Man to cross his broken bridges after 25 years on a downward spiral.

When the show, Mindhorn, is cancelled in the late 1989s, Thorncroft, high on booze and himself, burns all his bridges, insults the show and the inhabitants of the Isle of Man, and heads for Hollywood, assuming that Hollywood is waiting. The show’s tag line might have been ‘he sees the truth’, but Thorncroft certainly could not even imagine his own future. Twenty-five years later his middle-aged spread, receding hairline and waning sex appeal are only the most obvious obstacles to success.

With his last job a commercial for orthopaedic socks, Thorncroft visits his agent (Harriet Walter). Here, he is further humiliated by Simon Callow snickering at the notion that for Thorncroft, ‘maybe going backward is the new go forward.’ This seemingly adlibbed scene is hilarious, although we really feel for Thorncroft. He’s just returned from an excruciatingly embarrassing audition for Kenneth Branagh (playing himself) only to find he had been sent to the wrong audition.

But backwards it is for Thorncroft who has finally been offered a gig – on the Isle of Man. It’s not just any gig, however, as this show’s director is the dour Chief Inspector Newsome (David Schofield) whose wife seems to have been one of Thorncroft’s conquests in his heyday. When a woman’s body is washed up on Douglas Beach the police suspect a Mindhorn-obsessed psychopath (Russell Tovey) who calls himself the Kestrel. The trouble for Newsome is that the suspect refuses to speak to anyone but Mindhorn, whom the Kestrel believes is a real cop.

Thorncroft does not know what he is getting himself in for, however, when he steps off the ferry holding onto his wig for dear life. Needless to say the ‘caper’ is incidental to the reality-check involved in time-travelling back – and forward- to the Isle of Man
Stunt man Clive, a vintage car nut, has saved and invested his money and now lives in a large villa. More humiliation awaits Thorncroft when he believes he can woo back Patricia with a bouquet of flowers. An under-used Steve Coogan plays the vengeful Peter Eastman, who has built a lucrative business on the Isle around his minor character in the show.

Whether or not the insider jokes will play everywhere, many cinema-goers will appreciate that the Isle of Man is known for its generous tax incentives that attract dodgy productions. Mindhorn

delivers arguably the funniest line in the film when, with some cause here, he refers to the island’s limited gene pool.

The nonsensical plot is definitely not the thing here. Long after the film is over you still can’t quite understand why the woman was murdered or believe the motivation behind Andrea Riseborough’s police woman – unless, of course, the gene pool joke is justified. Let’s be honest, too: the film sags in the middle, particularly in a dope taking scene that seems as dated as Mindhorn. Nor does the overly-tanned and fit Clive provide the laughs that he should, given his generous screen time and the fact that actor Simon Farnaby is the script’s co-writer.

Despite these reservations, the film’s sheer absurdity, Barrett’s perfect comic delivery and some great gags make it one of the funniest films in a long time. Moreover, as in the best comedies, there are underlying truths, here about the danger of a celebrity-obsessed culture and burning bridges, not to mention the insecurity of aging stars. There is also an underlying sadness when The Kestrel literally imprisons the now overweight, out of shape actor in the costume that he could never manage to shake off.