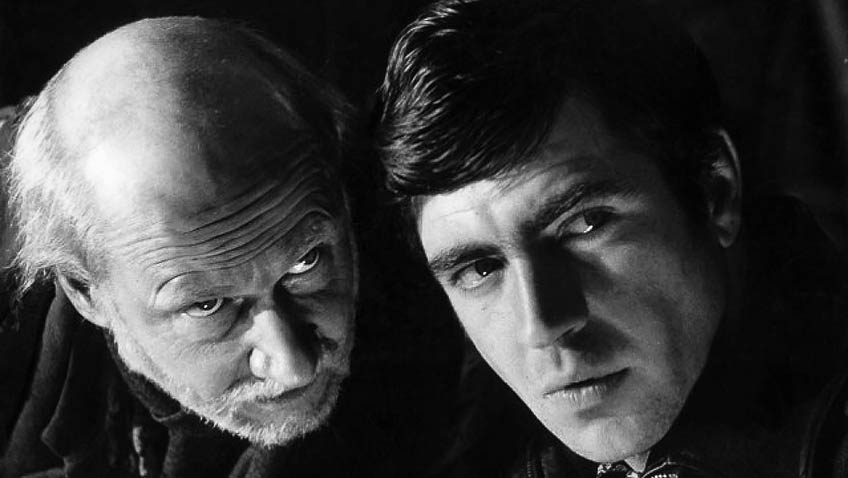 The Caretaker (BFI), which premiered in 1961 with Donald Pleasence in the title role, was Harold Pinter’s first commercial success and instantly established him as a major playwright. A dirty, stinking, racist tramp (Donald Pleasence), who is befriended by one brother (Robert Shaw) and humiliated by the other (Alan Bates), stupidly, switches his allegiance to the bully and finds he is rejected by both men. Clive Donner’s 1963 film doesn’t work as well as the play does. Its main appeal is for theatre buffs and Pinter aficionados in that it preserves Pleasence’s famous stage performance.

Mr. Topaze (BFI). For his directorial film debut Peter Sellers in 1961 chose a play written in 1928 by Marcel Pagnol, one of France’s most popular but now long forgotten authors because he wanted to play Topaze, a poor, kind, innocent teacher of the highest moral standards who refuses to kowtow to the headmaster (Leo McKern) and a rich parent (Martita Hunt) when he is asked to revise a pupil’s marks. He is sacked and turns to crime and becomes a highly successful business swindler, deeply shocking his best friend (Michael Gough), an honest teacher. This theatrical fable would probably work better if it were set in the 1920s and acted in French.

Sink or Swim (StudioCanal). Depressed middle-aged Frenchmen think a bit of synchronised swimming will make them feel better about themselves. It wasn’t that long ago that there was a British film (Swimming with Men with a cast headed by Rob Brydon) on the same subject. Both films have the same source, a Swedish documentary. The French film (directed by Gilles Lellouche and headed by sad-eyed Mathieu Amalric) suffers from the fact that none of the characters is likeable and all of them are physically unattractive. The idea that they could win a gold medal in an international competition is ludicrous. Their female coach is singularly off-putting.