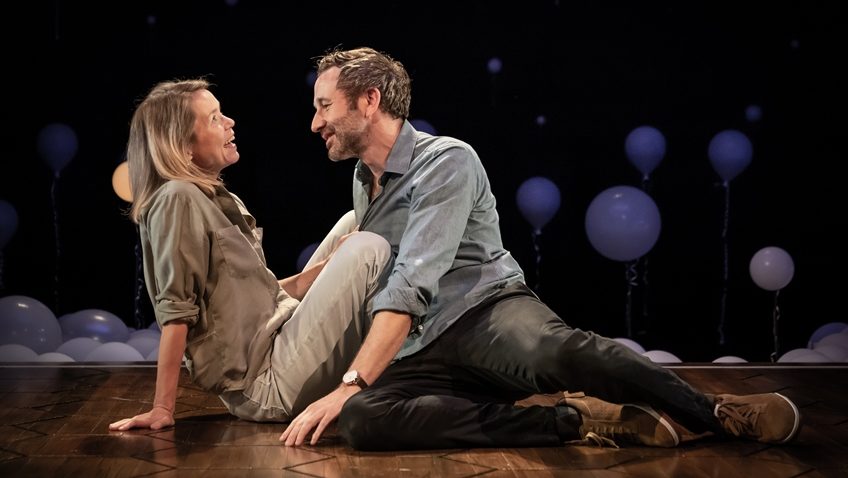 Why are we here and how are we meant to be spending our lives? Are we part of a multiverse? Do we have a choice? Is there really free will or is everything predestined? What kind of cards has life dealt you?

A professional beekeeper and a quantum cosmologist meet. The script explores the infinite possibilities of their relationship. Scenes are repeated again and again with different outcomes. A proposal of marriage is made in five different ways. It’s the construction of the play which makes it so fascinating to listen to and to watch.

I first saw Nick Payne’s Constellations, a two-hander with Rafe Spall and Sally Hawkins, directed by Michael Longhurst, at the Royal Court Theatre Upstairs in 2012 and I enjoyed it so much that I saw it again when it transferred to the West End.

Ten years on Longhurst has directed the play again; this time at the Vaudeville Theatre and with four different casts. The performances have been filmed and can now be seen online and all you have to do is choose between Sheila Atim & Ivanno Jeremiah, Peter Capaldi & Zoë Wanamaker, Omari Douglas & Russell Tovey, and Anna Maxwell Martin & Chris O’Dowd.

The play lasts 70 minutes. The actors manage the instant transitions with great skill and diversity. How did they learn their lines? How did they remember which sequence they were in? On one occasion they have to communicate in sign language.

Tom Scutt provides an attractive set. The square stage has balloons in a variety of sizes, hanging over it, a galaxy in its own right, with strings attached.

Only actors, directors and theatre critics are likely to want to watch all four versions within a month. So, which version should you watch if you want to watch only one version? The actors are good. It could be just a question of personalities.

Nick Payne’s script is actually about a younger relationship but Anna Maxwell Martin and Chris O’Dowd are excellent and make the roles their very own. Sheila Atim and Ivanno Jeremiah are the right age and certainly righter than Peter Capaldi and Zoe Wanamaker, who are miscast. The most original version is the one which turns the characters into two gay males. They are played by Omari Douglas and Russell Tovey who are very physical and sexy.

Watch one version and, if you like it, you will want to watch a second version. Constellations is a fascinating and a rewarding experience. So, go to Google and type in Constellations on Demand – The Donmar Warehouse. Watch Anna Maxwell Martin and Chris O’Dowd first.