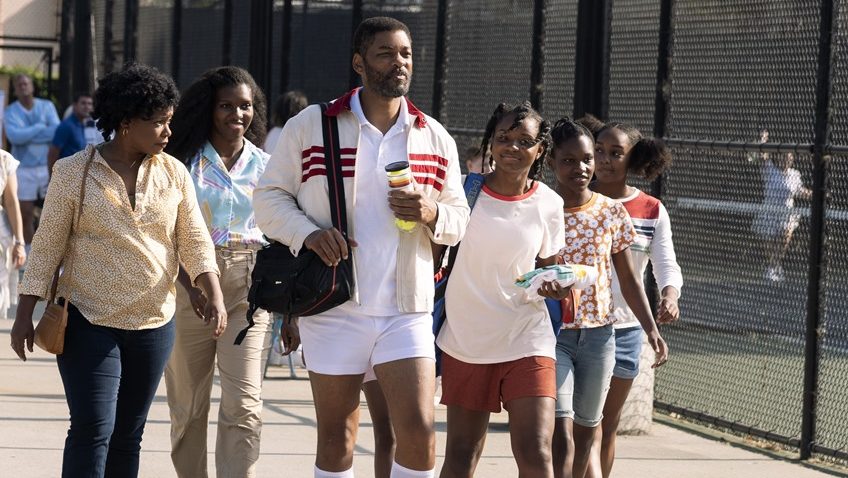 Early on in Reinaldo Marcus Green’s entertaining biopic King Richard, security guard Richard Williams (Will Smith) takes his two pre-pubescent daughters to a derelict tennis court in the black ghetto of Compton, California. He affixes three handwritten posters to the fence. The first addresses self-belief, the second humility, and the third is a cautionary note: “If you fail to plan you plan to fail.” You might know all about tennis superstars Venus and Serena Williams, but not that their destiny was mapped out in a 78-page plan spawned from their father’s deep-rooted resentment, fears, frustrations and defiance before they were even born.

This is an origins story of real-life superheroes, who, as Richard reminds them, have a responsibility as role models as they will inspire black girls the world over. Two years before Venus was born, Richard happened to tune into a tennis match where he saw Virginia Ruzici win $40,000 – twenty times more than his annual salary – for one match. He wrote out plans for the entire careers of the two children he would have with his new wife, Oracene “Brandy” Price (Aunjanue Ellis). According to the film, everything he prophesised came true because the family stuck to the plan.

When the film begins Richard and Brandy live with their five daughters (Brandy was a widow with three daughters when she met Richard) in a two-bedroom house in Compton. Determined to keep their young daughters out of trouble, Richard and Brandy, both amateur tennis players, begin coaching Venus (Saniyya Sidney) and Serena (Demi Singleton) while insisting they maintain straight “A” grades to be well rounded human beings. The five sisters of varying ages sleep in one cramped room with four cots. Richard tells them when the first million-dollar cheque comes in, they can buy all the beds they need. If the girls ever complained, rebelled or exhibited sibling rivalry, we never hear about it in this film.

Reinaldo Marcus Green’s well-paced direction and Will Smith’s (The Pursuit of Happyness, Men in Black) perfectly judged performance as the eponymous pushy, tennis parent are enhanced by Zach Baylin’s (Side Effects) witty and comprehensive – if a bit repetitive – script that dips into dark and controversial places while keeping us laughing out loud.

‘If it wasn’t the clan, it was the police or some white gang’, Richard tells his daughters after having been continually beaten up (we never learn why) by a black gang at the courts. ‘They showed no respect for Richard Williams…but they’re gonna respect you all.’

Respect is in short supply when Brandy points out that the girls are not going to get to Wimbledon without a professional coach and facilities, and he sets out to find them. Always prepared with brochures and videos of the girls, he makes an appointment with Vic Braden (Tracy Austin’s coach), who, never having heard of the girls, says: ‘It’s like asking someone to believe you have the next two Mozarts living in your house.’ He need not add, ‘especially in a house in Compton.’

If finding a top coach for black girls who have never played a match is difficult, coaching the girls with Richard’s constant interference proves equally trying. Richard’s treatment of his top-notch coaches is often hilarious, as when he crashes Paul Cohen’s (Tony Goldwyn) lesson with John McEnroe and Pete Sampras, asking Sampras if he doesn’t mind watching his daughters hit.

Central to the plan is for Richard to protect his daughters while driving them. A nosy neighbour reports the parents to the police for child abuse, but Cohen – and later Rick Macci (John Bernthal) are adamant that without going through the Juniors’ circuit and playing matches, the girls will not progress to pro status. When Richard insists on pulling Venus out of the Juniors’, Cohen complains, ‘You’re the most stubborn person I’ve ever met – and I coach John McEnroe!’

After ditching Cohen, Richard aims higher. In one of the funniest scenes, Richard persuades Jennifer Capriati’s coach, Rick Macci to take on not just Venus and Serena (against 15% of future earnings), but the entire family, providing them with accommodation, top schools in Florida – and a mobile home to get across country. But when Richard hears on the news that world number one, Capriati has been arrested on drug charges, he pulls Venus out of Juniors, without pondering the role Capriati’s assertive father played on her early burn out.

Smith plays Richard as a loveable and loathable wheeler-dealer, who feels a sense of entitlement for his girls due to his own limited career choices. His ambition is, however, tempered by a sense of fair play. He wishes Venus’s opponents good luck and refuses to argue when a white tennis dad calls a shot out when it is not.

While this is Smith’s movie, Aunjanue Ellis is his match. We see that Brandy, though often passive, wields the real power. In a relatively pungent scene, given that Venus and Serena are Executive Producers, Brandy tells Richard that she stays in the marriage for her daughters and not for him, referring to how he walks away from what he does not want to hear, just like how he walked away from failed business ventures and many estranged children from multiple women.

When Paul Cohen stipulates that without payment he cannot take both daughters, Brandy coaches Serena, and later reveals that she corrected Serena’s serve (that Richard got wrong) and was the originator of the open-stance position that Richard insists on. It is Brandy who persuades Richard to let 14-year-old Venus decide if she’s ready to turn pro (she is) and accept an early sponsorship deal (she holds out).

Though King Richard is a biographical, and “triumph over adversity” sports movie, it largely avoids the clichés of the genre, even if, in a bit of reverse discrimination, many of the white, and a gang of black, secondary characters are caricatures used for comic and dramatic effect respectively.

In most movies knowing how things turn out is a spoiler, but here, the hindsight is the point of the film. The satisfaction comes from knowing how it turned out and then watching how, step by step, two lower class, black girls from the ghetto turned a white, privileged-class game upside down. In a tense, climatic scene, when triple grand slam champion Arantxa Sanchez Vicario “freezes out” novice Venus with a long toilet break, throwing her off her game, we know it’s just a temporary set-back.