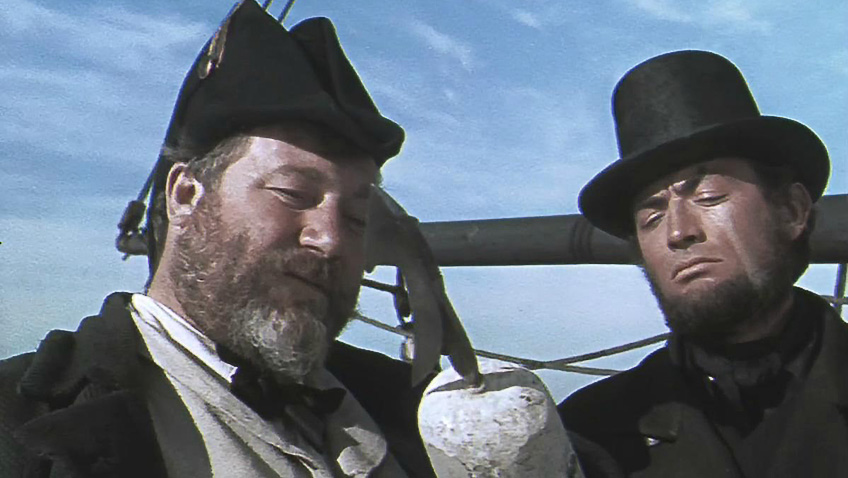 The big fight in 1851: Captain Ahab versus Moby Dick

Moby Dick (StudioCanal). Captain Ahab had his leg bitten off by a giant white whale, 90 foot long weighing 600 tons. His obsession/lust for revenge leads him to lose his mind, his soul and his life. John Huston went massively over budget directing Herman Melville’s 1851 masterpiece. He had wanted to cast his dad, Walter Huston, but the studio wanted a box office name. Gregory Peck has authority but it is not demonic enough and it often feels as if he is quoting from Melville’s biblical rhetoric rather than acting it. The scenes at sea with the crew of the Pequod battling the elements (the wrath of God) and harpooning the whale are tremendous.

Diego Maradona (Altitude). 33 years on the memory of the Hand of God, the infamous winning goal scored in the 1986 World Cup in Mexico between Argentine and England, is not forgotten. The best footballer in the world, a cheat and a genius, had two personalities: the nice (Diego) and the public, not so nice (Maradona). It was a heavy weight for him to be so famous. Asif Kapadia’s gripping documentary concentrates on the decade he spent in gangster-ridden Naples and how he revitalised the city. It was an era, which brought out the best and worst in him, a life of goals and drugs. The archival footage is always interesting especially when you are watching him in action on the field.

The Emperor’s Naked Army Marches On (Second Run) is an extraordinary morally ambiguous Japanese documentary by Kazuo Hara, five years in the making, and released in 1987. It is both a portrait of a traumatised World War 2 veteran, Kenzo Okuzaki, and also his crusade to find out what happened in New Guinea in August 1945 – 23 days after the war had ended. Hara does not stop filming and intervene when Okuzaki attacks the old man he is interrogating about his part in the war crimes. The camera rolls on. Charismatic Okuzaki, deeply religious, motivated by his own guilt, uses violence to force out the shocking truth, namely that men had been shot and cannibalised to feed their officers.

Snow Queen: Fire and Ice (Altitude) is Russian animation; but not to worry everybody speaks English. The orphaned siblings continue to conquer evil. There is flowing lava and crushing avalanches for them to confront and overcome. There are pirates with cannon balls. Everything is on fire; even a bad boy’s hair. The graphics, often violent and sometimes horrific, are impressive. The film is aimed at young children and emphasises the importance of family.