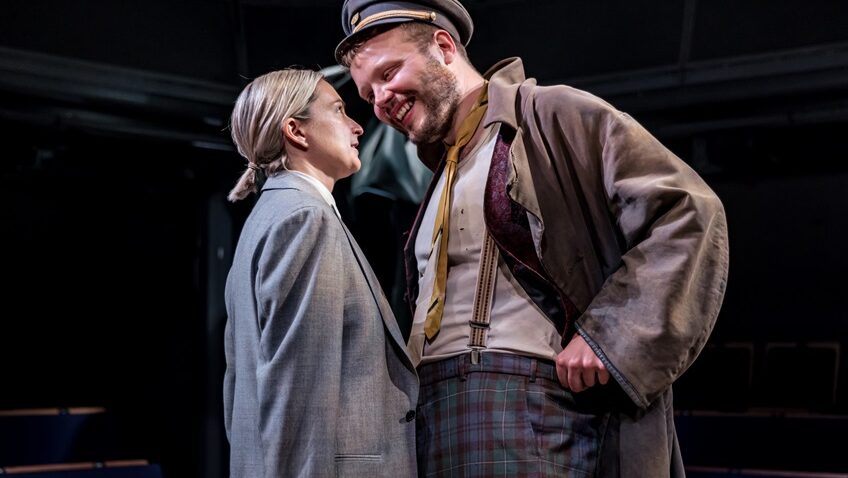 The plays by the great French writer Marivaux, famed for their wit and subtle psychological insights, deserve to be revived more often. The marivaudage (once, but no longer, a term of abuse) needs the classiest and most aristocratic of performances.

The False Servant, which premiered in 1724, is all about money and sex and sexual ambiguity. Martin Crimp provides a smart translation.

A young heiress (Lizzie Watts) disguises herself as a chevalier in order to observe the conduct of her future husband (Julian Moore-Cook). She discovers he is already engaged to a Countess (Phoebe Pryce) who is worth 6 million francs and whom he is intending to ditch so he can marry her, but only because she is worth 12 million.

Totally lacking in integrity, he treats woman with the utmost contempt. Living in the 18th century and a typical product of his class, he believes it unseemly to love a wife and admit to it in public. Once they are married and the money is in his pocket, his wife will be packed off to the country.

He owes the Countess 10 million francs. The only way the debt can be cancelled is if she falls in love with somebody else and ditches him. He persuades the Chevalier to court her. What interests the Chevalier is how far she can go and how far the others will let her go. The role was specially written for the great actress, Silvia, Marivaux’s mistress.

18th century comedies are full of women disguising themselves as men. Transvestite roles were extremely popular with actresses and male audiences because it allowed the actress the opportunity to show her legs.

Paul Miller’s revival, acted in the round on a floor with a maize design, carries its cynicism with a light touch and is never as cruel and as unpleasant as the characters and the play itself.