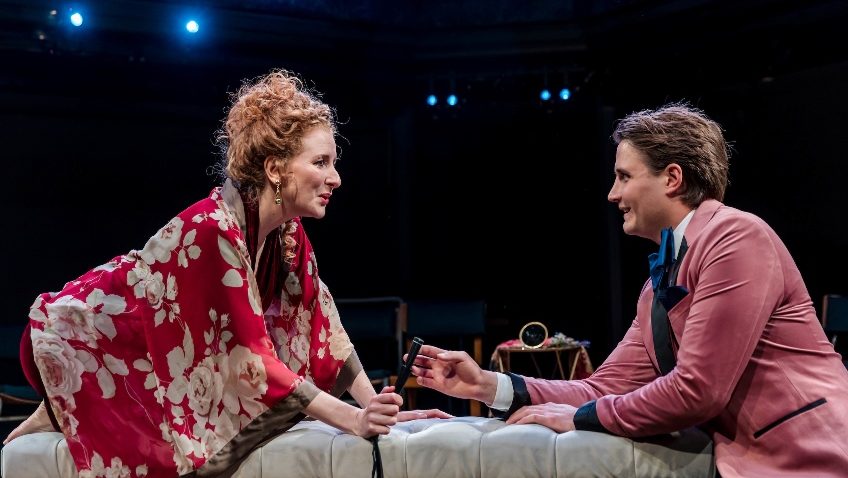 I have not been inside a theatre for the last 15 months. So, a visit to the Orange Tree Theatre was something special. The theatre for its re-opening production is limited to 70 seats. The chairs are socially distanced and spread around the auditorium, which now feels like an intimate cabaret space without the tables.

Paul Miller, the artistic director, has chosen a double-bill of one-act plays by Bernard Shaw, which are played straight through without an interval and only a blackout between them. The performance lasts about 80 minutes.

HOW HE LIED TO HER HUSBAND, premiered in New York in 1904 as a curtain-raiser to Shaw’s full-length Napoleonic comedy, The Man of Destiny. The play is a farce written in the French vaudeville manner but anglicised with all the sexy bits removed.

Shaw gives the familiar eternal triangle a neat twist. The husband is outraged when a young poet denies being in love with his wife. “So, my wife is not good enough for you, isn’t she?” He is proud that a young man should love his wife and offers to pay for the poet’s love poems to his wife to be published. Dorothea Myer-Bennett as the wife has the necessary style.

OVERRULED, a conversation piece between two married couples, premiered in 1912. Shaw was in love with the famous actress Mrs Patrick Campbell when he wrote this witty one-act debate on adultery and wife-swapping. The infatuations and flirtations take place during a cruise.

The comedy, originally called Trespassers Will Be Prosecuted, was a resounding failure. Edwardian theatregoers were shocked by its immorality. “The audience simply loathed us,” wrote Shaw in a letter to the playwright J M Barrie, who shared the bill with him. “They weren’t indifferent: we didn’t fall flat; they were angrily disgusted; we were trampled on, kicked and hurled downstairs and out into the street.”

The actors shout a bit too much and the pace at times is rushed; but there is an excellent performance by Alex Bhat as a man, who promised his mother never to make love to a married woman and finds he has, unwittingly, done just that.

You can find out more about The Orange Tree Theatre by visiting its website here.

Images courtesy of The Other Richard.