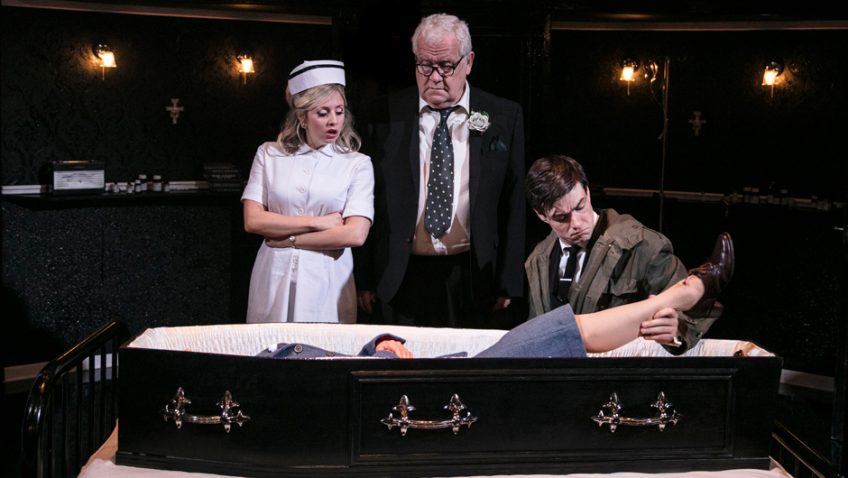 50 years ago on 9 August 1967, Joe Orton was murdered by his lover, Kenneth Halliwell, in their Islington home. He was only 34.

Orton has been variously described as the Oscar Wilde of Welfare State gentility, the Douanier Rousseau of the criminal suburbs and the Grandma Moses of the rubbish dump. The special quality of his writing always was its outrageous mixture of black farce, violence, sex and bad taste. Comic absurdity and sheer nastiness are fused with style and wit.

Loot is given a raucous revival by Michael Fentiman.

Christopher Fulford is the brutal and corrupt idiot-policeman and Sinead Matthews is the gold-digging Irish nurse who has already murdered seven husbands.

The play opens with a mother dead in her coffin. Her son (Sam Frenchum) and his lover (Calvin Demba) have just robbed the local bank and the money is stashed away in a cupboard.

Hearing that the police are on their way, they need to find a better hiding place quickly. So they take the mother out of the coffin and shove her in the cupboard, standing her on her head.

Orton was no respecter of the Roman Catholic Church, the Police or indeed the Dead. The treatment of the corpse is as outrageous as it always was

Loot’s premiere back in 1965 followed the first British police inquiry into corruption in its own ranks. The jokes at the expense of the police still 50 years on get the biggest laughs.

Inspector Truscott of Scotland Yard (who pretends to be an official from the Water Board, a disguise which doesn’t fool anybody) is a great comic policeman creation

“Who’s been filling your head with that rubbish?” asks Truscott (a very aggressive Christopher Fulford).

The role was created specifically for Kenneth Williams, who was, ironically, totally miscast and had to be replaced before the play came into the West End.

A major innovation is that the corpse is not a dummy, but an actress, Anah Ruddin, a very supple actress, who has to play dead and suffer numerous indignities, including full nudity, which she does so remarkably well that the audience gives her a cheer in the curtain call.