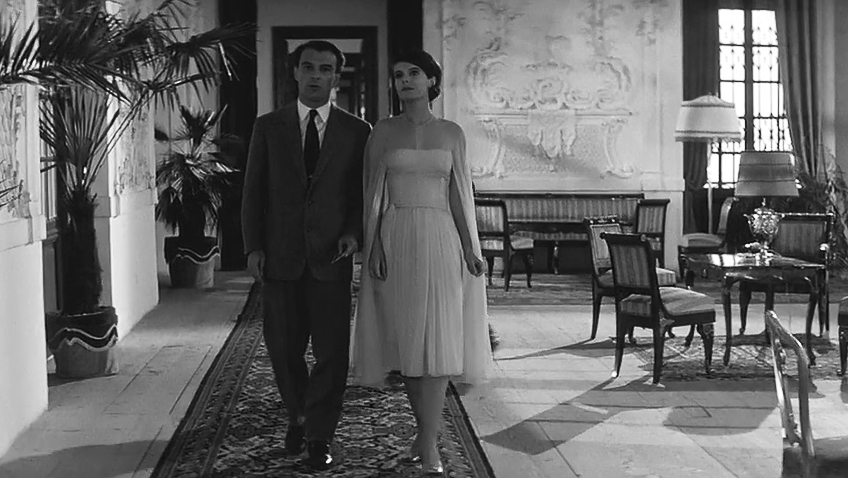 What really happened last year at Marienbad? You decide

Last Year in Marienbad (StudioCanal). Premiered in 1961 the Alain Resnais and Alain Robbe-Grillet masterpiece is still spellbinding. The setting is a chateau, a luxurious Baroque spa hotel with endless marbled corridors, locked doors, mirrors, chandeliers and formal gardens: a sumptuous yet cold labyrinth, brilliantly photographed in black and white by Sasha Vierny.

There are three characters called A, X and M. Much of what happens is in their imaginations and impossible to fix because the scenario constantly plays with reality and time. A (Giorgio Albertazzi) says that last year he had an affair with E (Delphine Seyrig). She denies it. Can he persuade her to leave M (Sacha Pitoëff), her husband?

Costumed by Coco Chanel, the film, timelessly elegant, is a highly sophisticated series of fragmented moments, stylish, poetic, theatrical and totally anti-realistic. The script is literary and largely voice-over. The stilted actors, surrounded by silent static groups, play out a cold intellectual dreamlike memory game/puzzle. Often dismissed as pretentious, it failed at the box office. But then, as now, anybody who is seriously interested in the history of cinema has to see this fascinatingly enigmatic film and decide for themselves what happened.

On Chesil Beach (Lionsgate). We all know that Phillip Larkin said sexual intercourse began in nineteen sixty-three – which is a bit late for the two university graduates who are living in 1962. Ian McEwan has adapted his own novella for the screen. Dominic Cooke directs. The two virgins (Saoirse Ronan and Billy Howle) have the most excruciatingly embarrassing honeymoon when they spectacularly fail to consummate their marriage. She says she loves him but that she will never have sex with him. She finds sex disgusting. There are flashbacks to their courtship and their parents. I am sure I do not need to tell you what Larkin said about parents.

Salvador (Eureka). Oliver Stone, who served in Vietnam and was awarded a bronze and a purple heart, makes big controversial political movies. His criticism and castigation of the USA’s involvement in the civil war (1980/1981) in Salvador did not go down well with the public and the film did poorly at the box office in 1986. The main character is a cynical, arrogant, burnt-out war photojournalist (James Woods) who is recording the massacres committed by the right wing Death Squad which include the murder of Archbishop Romero in the cathedral and the rape and murder of four American churchwomen. 30,000 disappeared. Stone captures the brutal chaos spectacularly.

Madame (StudioCanal). In this French film, set in Paris, everybody speaks English and so it sounds as if it has been dubbed. A rich American wants to sell a Caravaggio. His superstitious wife (Toni Collette) refuses to sit 13 at a table and insists her Spanish housemaid play the part of the missing guest. An Irish millionaire art dealer falls in love with her, unaware she is a housemaid. The maid is played by the flamboyant Spanish actress, Rossy de Palma, a regular in the films of Pedro Almodóvar. The films feels it ought to be a period piece, the sort of thing Jean Anouilh used to write and set in a fantasy past; but author/director Amanda Sthers’ script does not have Anouilh’s artifice, wit and satire.

The Ciambra (Peccadillo). A family of Romani gypsies in Southern Italy make a living by petty crime. A 14-year-old boy (Pio Amato), almost but not quite a man, takes on the role of breadwinner when his father and elder brother are imprisoned. He is befriended by the African refugees and a Ghanaian (Koudous Seihon) in particular. Illiterate, he is doomed to a criminal life and will almost certainly end up in prison or killed by the local Mafia. Director Jonas Carpignano takes a gritty neo-realist approach and has persuaded Amato and his extended family to play fictionalised versions of themselves.

Apostasy (Curzon Artificial Eye). A religious drama showing the pressures under which Jehovah Witnesses have to live. Daniel Kokotajlo was raised as a Jehovah Witness and his film is very stark and very murky in its photography. Armageddon is on its way and nobody is allowed to bend the rules. Jehovah’s Witnesses believe that the Bible prohibits ingesting blood and that Christians should not accept blood transfusions or donate or store their own blood for transfusion. One family’s faith is much tested. The mother (Siobhan Finneran, impressive) always puts her religion first and her family second. Many people will be shocked by what her two daughters have to go through.