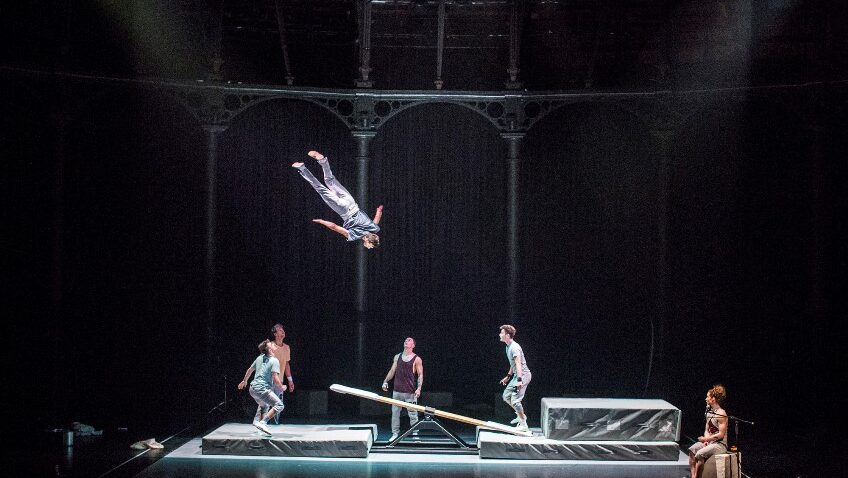 The London International Mime Festival is on now. I decided to see The Barely Methodical Troupe, an experimental acrobatic troupe, which fuses acrobatics and circus with theatre, contemporary dance and humour. The company was founded in 2013 and has made a name for itself.

Kin, which claims to be exploring group dynamics, is so poorly staged that I thought I must be watching a work in progress; until a friend pointed out that Kin had been seen at The Roundhouse in Camden in 2016.

There are some good moments. There’s a girl inside a cyr wheel circling at speed and doing acrobatic things. I also liked the two totem poles which are made out of two separate trios standing on top of each other and each enclosed in a huge black cloak.

The high spot is a see-saw act with some amazing high leaps and double somersaults in mid-air. It’s the sort of circus stunt you used to be able to see long ago in music hall variety shows up and down the country. The act is accompanied incongruously by the recorded voice of Edith Piaf singing Non, je ne regrette rien.

Kin only lasts an hour; yet feels vastly over-extended. The show takes a very long time to get started. The script is poor. The humour is childish. There is no contemporary dance. There is no emotional punch. The acrobats seem to be in class auditioning.

A lot of work is still needed to turn Kin into a theatrical experience. As it stands now in its present state, it certainly does not deserve a showcase at The Peacock Theatre.