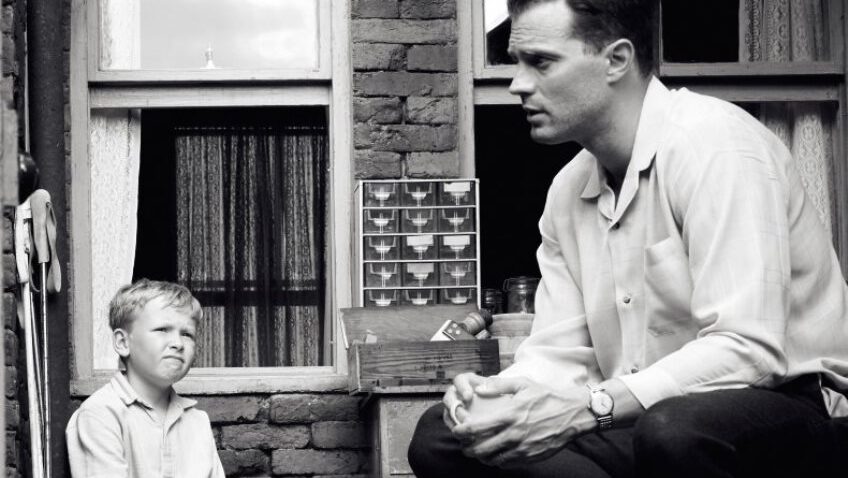 Judi Dench is the emotional core of Kenneth Branagh’s love letter to his childhood city.

There are two reasons why you cannot miss Kenneth Branagh’s new film, Belfast. In only ten minutes of screen time, Judi Dench propels the tear ducts into overdrive in her performance as Granny, somehow letting us read a myriad of thoughts and emotions into her glances. If she is not at least nominated for a Best Supporting Actress Oscar (even more deserved than for Shakespeare in Love), something is wrong. The second is the staging of the truly frightening sectarian violence that immerses the viewer in the danger and chaos. While in many ways an authentically autobiographical coming-of-age story, the film is let down by its episodic nature and heavy-handed direction, so that we feel Branagh manipulating the audience’s emotions.

Buddy (adorable newcomer Jude Hill) is a happy nine-year-old, running through the child-friendly, bustling, working class streets of Tigers Bay, Belfast saying hello to all the residents he knows by name. His toy sword and shield are all he will need to protect him – until 15 August 1969.

On that fateful day, just one month after the Apollo mission put two American Astronauts on the moon, a band of protestant thugs explode a bomb (the sound effects are stunning) and start a riot to intimidate any Catholics still in the area. The light infantry is brought in, and the television news predicts curfews. From then on there are barricades on either end of the street, night watchman patrol with torches and there are sporadic attacks on local shops. The exodus begins, and not all who go are Catholic.

And from then on, lowlife Billy Clanton (Colin Morgan) puts pressure on Buddy’s Pa (Jamie Dornan), and the rest of the family to join the Cause. Refusing to join any cause, Pa explains to Buddy that “there is no ‘our side’ and ‘their side’ on this street – at least there didn’t used to be.”

When Pa is away in England, Ma (Caitríona Balfe) who looks more like a Vogue model than a working class housewife, frets about Pa’s back taxes, family debts and controlling her two sons while Pa is hundreds of miles away. Their eldest son Will (Lewis McAskie) is being lured into running errands for the Cause while Buddy falls under the influence of local troublemaker Moira (Lara McDonnell) who coerces him into joining a group that has smashed the window of a grocery store, sending the Catholic owner crawling on her knees to the back door. With his sense of right and wrong at sixes and sevens, Buddy takes some detergent, hoping it will at least help his mother out. Ma is, of course, appalled and furious.

In a brilliantly staged sequence, Ma drags Buddy and Moira back to the store to return the stolen items amidst the looting, only to be taken hostage by Bill as bargaining tools for his escape. Pa appears out of nowhere and there is a tense standoff until the army arrives.

At this point, Pa is adamant that they must leave, and brings home brochures of Vancouver and Sydney where he can find work. When, after the latest threat to their lives, he tells Ma that a job in England will come with a house and garden, she is persuaded, but Buddy throws a tantrum at the prospect of leaving Belfast.

Scenes of violence, menace and arguments between Pa and Ma are juxtaposed in a schematic manner with scenes of family outings to the cinema, joyous Christmas celebrations and self-consciously endearing scenes of Buddy discussing his girl troubles with his Pop (Ciarán Hinds) and Granny (Dench). The subplot in which Buddy improves his grades to sit next to his dream girl, Catherine (Olive Tennant, David Tennant’s daughter) the smartest girl in the class, is meant to charm you and it might. But in all of the more lightweight scenes the camera lingers too long on reaction shots to each coy sentence or one-liner as if rubbing our noses in it.

The reaction shots from Buddy’s “adorable” outbursts and shots on Buddy’s face from remarks by others is so repetitive that it diffuses any natural emotion the audience might feel. Jude Hill seems to be a natural born performer and the camera loves him, but he performs more than he acts. It could be because Ciarán Hinds’ laboured one liners are already familiar from the trailers, but by the time they are delivered (often with misjudged comic timing, not entirely Hinds’ fault), they have lost their humour.

It is Dench who restores the balance from Hinds’ sentimentality and Hill’s over-egged acting. Like her son and his wife, Granny and Pop were childhood sweethearts, and we imagine that but for the troubles, Buddy might have carried on the tradition with Cathy. Granny supports her dying husband, her son, his conflicted wife, and her grandchildren as a listener. But in the moments where Branagh, who has worked with Dench a dozen times, isolates her face and thoughts as though in a bubble, she is the rock, pillar and emotional core of the film.

In a charming scene in the bus on a rainy night, film-buff Buddy shares his excitement at the prospect of seeing Chitty Chitty Bang Bang when his father returns. Granny laughs at the idea of this magical car and her thoughts wander to Frank Capra’s 1937 film Lost Horizon and the Shangri-la that was always beyond her reach. And later there’s Granny who could never escape and who has never meddled in the family’s decisions, leaning against the door of her empty house, whispering, ‘Go now, don’t look back’ to the rain.

Branagh and regulator cinematographer (Death on the Nile, Murder on the Orient Express, Thor) Haris Zambarloukos evoke a nostalgic past and a tough, neo-realist atmosphere with the use of monochrome cinematography particularly in conjunction with the Van Morrison dominated soundtrack. Morrison, was, like Branagh born into a working-class Protestant family in Belfast. His father worked in the shipyards that are captured here in helicopter shots in the opening minutes of the film as the camera sweeps over the historic and the modern, assertive buildings of the transformed, but scarred city.