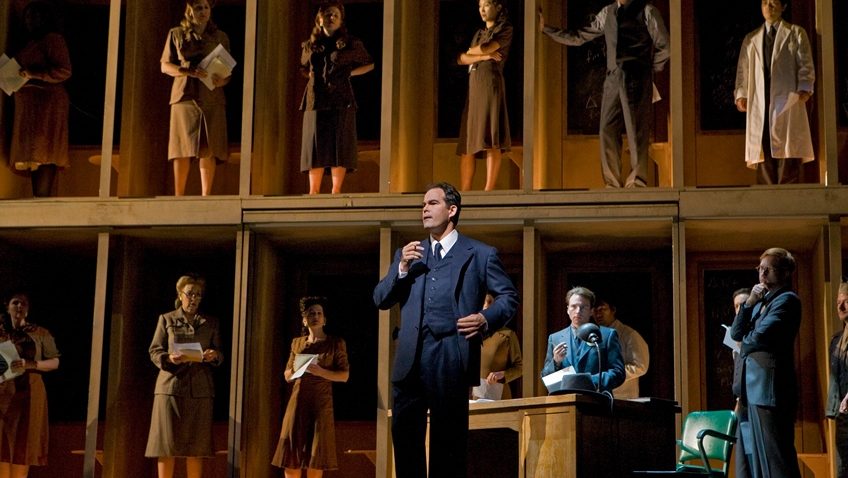 The destruction and radioactive debris the bomb would cause were on an unimaginable scale. The argument was the bomb (a blackboard potential of twenty thousand kilotons of TNT) would shorten the war and actually save lives.

This was not the first time Adams had investigated political and ethical issues on an operatic scale. He had already composed Nixon in China (1987) and The Death of Klinghoffer (1991).

His intention was to write a contemporary Faustian myth: in his pursuit of knowledge, a brilliant physicist makes an infernal compact with the US government.

The opera premiered at San Francisco Opera in 2005.

This revival, interestingly staged, starring Gerald Finley, excellent in the lead role of J Robert Oppenheimer, was directed by Penny Woolcock and conducted by Alan Gilbert. It was seen at The Metropolitan Opera House, New York in 2008.

Oppenheimer, the leader of the Manhattan Project, the team of scientists who created the bomb, believed that it was the responsibility of politicians, not scientists, to decide whether to bomb or not. A cultured man, he was consumed with guilt for the rest of his life.

The climax to Act One has Finley singing Adams’s setting of John Donne’s Holy Sonnet: “Batter my heart… and send Your force to break, blow, burn and make me new.”