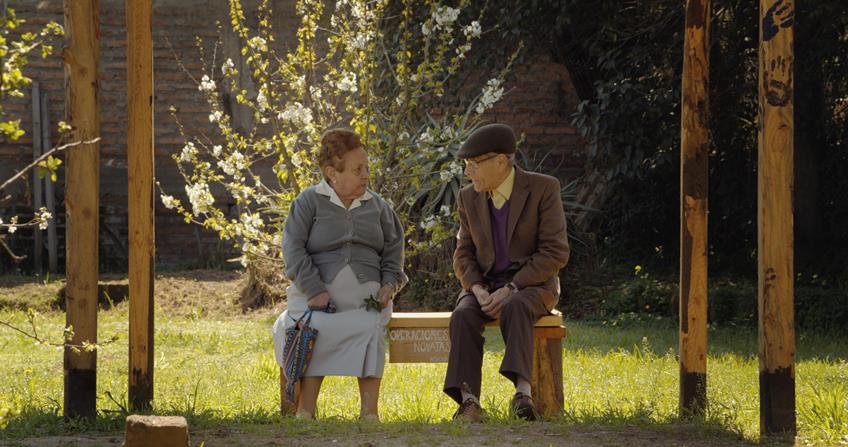 An 83-year-old family man goes undercover in a nursing home in this Chilean docudrama.

There is one truism for males over the age of 80 regardless of nationality: you are never going to see a classified ad like this: “Elderly male needed. Retired, between 80 and 90 years old…Independent, discrete and competent with technology.” But Chilean writer-director Maite Alberdi’s documentary, which begins with this ad in Spanish, gets even more topical when the nature of the agent’s mission turns out to be reporting on elder abuse in a Santiago nursing home.

This heart-warming, if slightly deceptive film opens with one of the most hilarious series of interviews you will ever see in a movie. Naturally, there are quite a few eager beavers applying for the job, and the questions are not your typical interview questions either. One candidate stares open mouthed at the recruiter:
‘Mole agent? Could you please explain that to me?’
‘A spy.’
‘Right. A spy.’
‘Without anyone knowing that you are a spy.’

Few applicants would be asked if their children would have any objections to their taking a job, but when you are 83, like Sergio, the parent-child relationship has altered. When Sergio (Sergio Chamy) explains that he is a recent widower with three children and grandchildren, he is asked if his children would mind him living in a nursing home for three months. ‘If I get this job there won’t be any problem because I’m the one who makes decisions about myself.’ He gets the job.

The training is equally humorous with Sergio learning about reporting on What’s App and how to operate his James Bond-like pen and glasses with built in cameras.

An interview with his daughter Dalal brings tears to her eyes and ours when she raises (good) questions about the job and Sergio attempts to reassure her: ‘This has truly been something mentally liberating to me… because I’m beginning to feel like the person I used to be. Now I’m not thinking of your mother as I was at home, now…I’m so exhausted I just go to bed.’

The client is the daughter of Sonia Pérez. As in any spy film, Sergio must memorise the face as he cannot carry any photos of Pérez with him. The problem proves to be more challenging. When Sergio gets to the nursing home, he finds that all the women look alike.

The remainder of the film alternates between gentle humour and sadness as Sergio’s journey turns out to be as eye-opening and life-altering for him as it is for the ladies in the nursing home. He cannot wait to see the back of the home.

As it happens, Mrs Pérez, arguably the least likeable person in the home, is not the star of the film. At dinner on Sergio’s first day, he is seated alone, but he is the one being spied on. A table of chatty ladies (there are only four other men in the home) check out the newcomer like co-eds in a High School cafeteria. The most aggressive of them, still hoping to find her first husband, makes a gift of her dessert like an offering and continues to stalk out Sergio until he politely tells her he is not yet ready for a relationship.

There is Marta, a pickpocket who receives regular calls from her dead mother whom she fears has abandoned her; Petita the poet who complains that “life is cruel” and the kindly, depressed Mrs Rubira suffering from dementia with whom Sergio forms a bond. He goes out of his way to get photos of her children which he shares with her, asking her if perhaps they do come to visit, and she just cannot remember the visits. Sergio’s compassion, intelligence, and willingness to listen, makes you think of what a wonderful husband he must have been.

The reports to the agency become thinner, as does the film as we start to wonder how much is true and how much is staged. Some of the documentary is shot by Sergio, but Alberdi does not hide her small crew that shoot the other half of the film, including Sergio’s 84th birthday party, where he dances and is kissed by all the women.

Like Philippe Marlowe before him, Sergio finds himself suspecting the client and not the object of his surveillance. Although the home is run like an open prison, while Sergio searches everywhere for signs of abuse, all he finds is despair, senility and loneliness. This is a pre-Covid-19 film, of course, but prophetic in leaving us to contemplate the loneliness of those without and even with relatives who are unable to visit.

In addition to wondering how much of the film was acted and staged for the cameras, you might ask where the spectre of Pinochet is. Between 1974 and 1990 the job applicants and residents were working, paying mortgages or rent, raising children or hoping for a better life for their grandchildren. They must surely retain the scars of the Pinochet era when most people knew a desapareció and like the Soviet Union under Stalin your best friend could turn you in and everyone was a suspect. When we see the recruiter with violent action film posters, Scarface and an Al Capone license plate it is, at first, a comic touch. But when we hear him ask the job applicants if they would mind snitching on these old folks (before being told why), it is surprising that without a pause, we hear one man say, ‘not at all.’