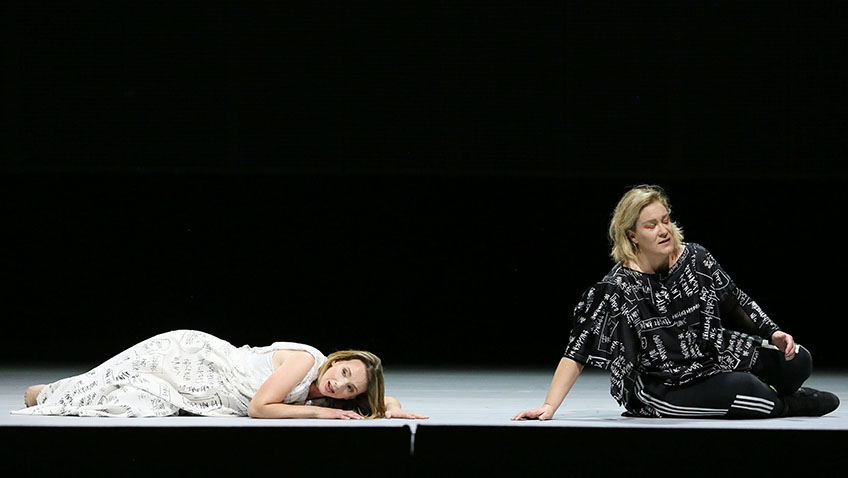 Orpheus, the number one poet, who could entertain wild beats with his singing and lyre playing and cause rocks and trees to dance, goes to the underworld in search of his wife, Eurydice.

He successfully negotiates her release by offering Hades a song; but he does not stick to the condition laid down by Hades (that he must not look back at her until he reached the land of the living) and he loses her forever. 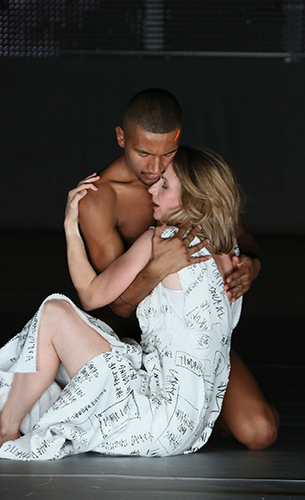 Sarah Tynan and Jacob O’Connell in Orpheus and Eurydice

ENO is exploring the myth of Orpheus and Eurydice across four productions and more than two centuries of music drama in dance, film, theatre as well as opera.

The four operas are Gluck’s Orpheus and Eurydice, Offenbach’s Orpheus in the Underworld, Harrison Birtwhistle’s The Mask of Orpheus and Philip Glass’s Orphée, an adaptation of the Cocteau film.

ENO’s season kicks off with Gluck’s masterpiece, which premiered in 1762 in Vienna and sprung a big surprise, which delighted Viennese audiences. Orpheus and Eurydice didn’t die at the end!

The last time I saw Gluck’s opera was in Harry Kuptner brilliantly theatrical production, choreographed by Hofesh Shechter, for Komische Oper Berlin at the Royal Opera House, and it was totally gripping from start to finish. I longed to see it again.

The opera needs a choreographer. Dance is an integral part. ENO has invited Wayne McGregor to choreograph and direct; and he has brought in dancers from his own company.

McGregor has said “I just want it to be an act of beauty.” The opening mime with Eurydice having two lethal injections gets the production off to a dull start and beauty is not something designer Lizzie Clachan brings to the production.

The stage is a huge empty space, good for the dancers, not so good for the singers. The three lead roles, Orpheus, Eurydice and Love, are played by women. “It’s a story of love and love is genderless,” explains McGregor.

I should have preferred a male high tenor who looked like a poet in love. Orpheus’s ugly costume makes Alice Coote look like a female soldier in battle fatigue and not a lyre in sight. I was never emotionally involved. Sarah Tynan is Eurydice. Soraya Mafi is Eros.

I would have thought McGregor could have come up with something more exciting and frightening for the Furies, something comparable to William-Adolphe Bouguereau’s painting.

The flashing screen and the projected images are a good idea. The fluorescent costumes are not. The high spot is when the dancers are all lying on top of each other, like a rugby scrum, and they make a mass heaving movement every time the chorus off-stage sing NO to Orpheus’s wish to go to the underworld.

The choreography is dull for the blessed spirits in Elysian and only feels appropriate when the dancers are sitting cross-legged on the ground and doing hand movements. The best moment is when Jacob O’Connell in Act 3 dances a solo as Coote sings the beautiful aria, “I have lost my Eurydice”.