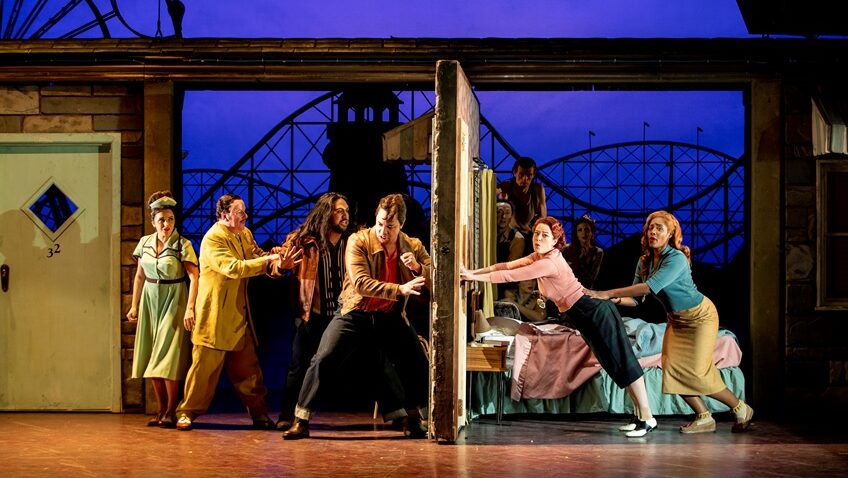 For much of the 19th century, Mozart’s opera (which had premiered in Vienna in 1790) was thought to be too risqué to be staged and it wasn’t until the 20th century that it regained its popularity

Two young officers (Benson Wilson and Amitai Pati) naively boast that their fiancées (Nordus Williams and Hanna Hipp) would never be unfaithful. Their friend, Don Alfonso (Neal Davies), an older and wiser man, bets them that they will be no different to other women. Cosi fan tutte translates as Women are like that.

The boys accept the bet, pretend to be called up, and go off to war. They return in disguise to seduce each other’s fiancée. The girls’s maid (Soraya Mafi) encourages the girls to be like boys and unfaithful. What starts off as a joke gets completely out of hand and the girls are humiliated.

The opera was based on a real-life incident and what makes it special is that under the farce and frivolity Mozart finds real feeling and heartbreak. At ENO, it’s all frivolity.

Director Phelim McDermott and improbable can always be relied on to come up with something different. He takes a Broadway musical comedy approach and the production takes over the opera so completely that it feels as if Mozart and the lead singers are playing supporting roles to the spectacle.

The show starts during the overture with the arrival of a circus troupe clambering out of a magic box, one by one, very commedia dell’arte, very Fellini. Nobody listens to the overture conducted by Karem Hasan. The troupe then go on to act as stagehands and sceneshifters.

The action has been updated to the 1950s and set first in a nightclub (with bunny girls) and then on Coney Island, alternating from motel to the fairground and all the fun of the fair with Ferris wheel, boats made out of teacups, horse carousels and swan love boats. Huge lighted hearts are trundled round the stage.

The boys are disguised as rock n roll Elvis louts. Soloists are given big production numbers, which become more and more distracting. Nordus Williams has to sing an aria whilst travelling in an air-balloon up and down and across the stage. There is so much going on the production becomes exhausting to watch.

The Ukrainian national anthem was played before the opera began which meant the girls’ prayer about keeping their fiancées from harm during the war took on a new poignancy.