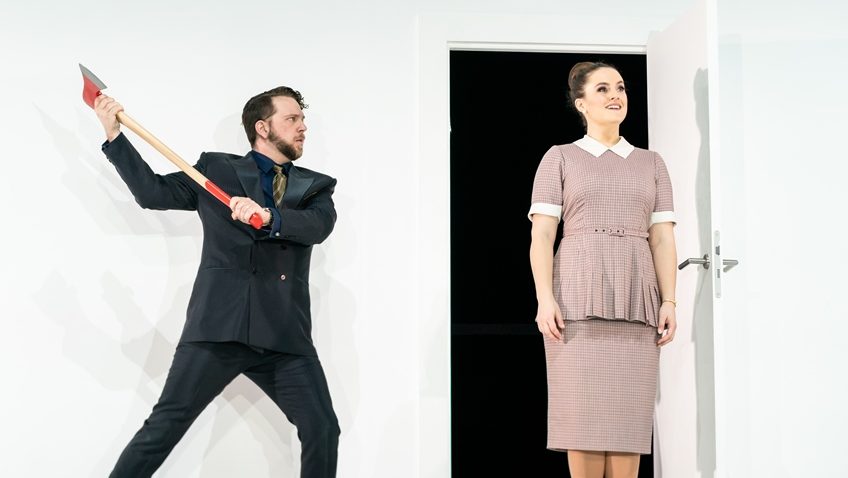 The Marriage of Figaro is a lot of fun

Can Figaro stop his master, Count Almaviva, from exercising his rights (droit du seigneur) and bedding his bride before he does?

King Louis XVI banned Beaumarchais’ comedy, finding the attacks on the social order and the mockery of authority and privilege detestable and thinking a production would be dangerous folly.

Three years later his wife, Marie Antoinette, persuaded him to allow a private performance. And we all know what happened next. Danton said it was Beaumarchais who killed the aristocracy.

The play premiered in 1784 and enjoyed an unprecedented success, its fame sweeping Europe.

Mozart, who was looking for something new, was quick off the mark and his opera opened in Vienna in 1786. Lorenzo Da Ponte’s libretto cut all the subversive political stuff.

The opera was a huge success. There were so many encores that Emperor Joseph banned encores at later performances.

On stage at the Coliseum there is a big empty oblong white box with four identical doors.

During the overture, conducted by Kevin John Edusei, there is an amazing amount of quick entrances and quick exits by the posturing singers through these four doors which are opened and slammed shut in time with the music.

Audiences are immediately alerted they are about to see a farce and that Joe Hill-Gibbins’s highly stylized production is going to be a lot of fun. And so, it proves. The English translation is by Jeremy Sams.

The surprise is the box and doors remain throughout. Hill-Gibbins wanted things simple and had stripped everything else away, scenery, furniture, props. He is interested in the emotional and sensual aspects of the opera rather than its politics.

He has the singers in modern dress and singing directly to the audience. The cast, full of strong likeable personalities and lovely voices, is very much an ensemble.

Johnathan McCullough is the philandering Count Almaviva. Elizabeth Watts is his wife. Bazidar Smiljanic is the resourceful Figaro. Louise Alder is his fiancée. Hanna Hipp is Cherubino, Susan Bickley is Marcillina and Andrew Shore is Dr Bartolo.

Mozart’s music, a sublime mixture of wit and melancholy, humanises the farce. The ensembles are wonderful.