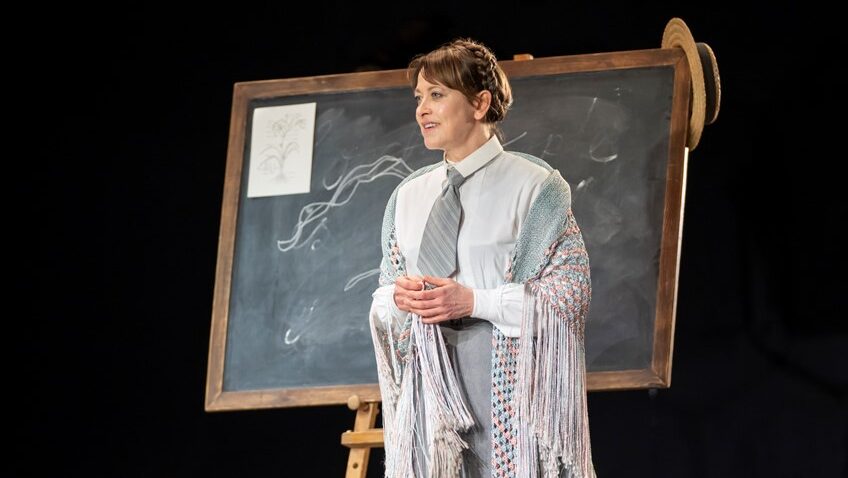 Emlyn Williams’s fame as a writer and actor rests on Night Must Fall, The Corn is Green and his impersonation of Charles Dickens giving readings from his novels

The semi-autobiographical The Corn is Green premiered in 1938 and was a big success in London and New York. The play is dedicated to Miss Cooke, his own inspirational teacher. “I can’t imagine,” she said, “the public being faintly interested in education.” How wrong she was.

Dominic Cooke’s revival for the National Theatre is the first in 37 years. His conceit is to put Emlyn Williams on stage and have him write the play as it goes along, deciding what is happening next. He also has him speaking rather too many stage directions.

The stage is bare. A Welsh male voice choir provide a background. The production is very stylized. There is no scenery and no props until the second act.

The setting is a remote, poor and illiterate Welsh mining village in the late 19th century. The children go down the mines at the age of 12. With the arrival of Miss Moffat, a middle-aged English spinster, things improve. She sets up a school in her own home and finances it out of her own pocket.

She realizes one of the boys, Morgan Evans, is an exceptionally talented pupil and spends two years preparing him to win a scholarship to Oxford. He both resents and appreciates her control over him. His future is nearly scuppered when he gets a teenage girl pregnant and the girl wants him to marry her, It’s an unsuitable match; even her own mother doesn’t like her.

Miss Moffat offers Morgan education. There is – and Emlyn Williams was very insistent on this – NO romantic subtext. The role has been played by such actors as Sybil Thorndike, Ethel Barrymore, Deborah Kerr and on film by Bette Davis and Katharine Hepburn.

Miss Moffat is now played by Nicola Walker, who gives a determined, independent, completely unsentimental performance. She has a fine scene when she spells out that Morgan’s duty is not to the girl, the baby or herself, but only to himself. Morgan Davies is played by Ivan Davies, making his professional theatrical debut. He is first-rate. So, too, is Gareth David-Lloyd as Emlyn Williams

The local squire, initially, cannot see the point of educating children who are going to be miners but his vanity is easily flattered by Miss Moffat into sponsoring Morgan. Rufus Wright acts the squire with a nice comic touch. Alice Orr-Ewing flutters equally nicely as a gentlewoman who adores him.

The National Theatre has a hit.