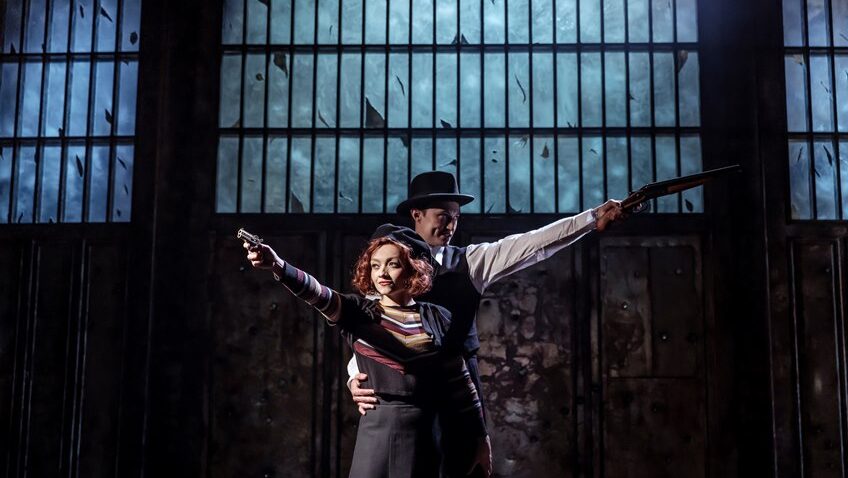 Bonnie Parker and Clyde Barrow, who robbed grocery stores, gas stations and banks, captured the imagination of the public during the Great American Depression and became celebrities, as popular as film stars. People wanted their autographs. The police finally caught up with them and they were killed in an ambush in 1934.

In 1967 Arthur Penn directed a film, one of the very best gangster movies of all time, a classic. Faye Dunaway and Warren Beatty in the lead roles gave the couple all the glamour and fame the real Bonnie and Clyde craved.

The movie divided the American nation and was widely criticised for its brutal violence and for making the criminals, who were not only robbers but also murderers, far too likeable.

The film, brilliantly edited, was remarkable for its constantly shifting gear, from violence to lyricism, from romance to comedy, a repeated cycle, to a jaunty 1930’s musical score.

The film, with lots of cars and lots of bullets, is a road movie set in big open rural spaces. How is any stage version going to compete with all that?

Faye Dunaway and Warren Beatty are a hard act to follow. The final image of the couple’s twitching bodies and their car, riddled with bullets, is unforgettable.

The musical version premiered in 2009 in San Diego, California and later in 2011 on Broadway. The book is by Ivan Menchall. The music is by Frank Vildhorn. The lyrics are by Don Black. The score gained a large cult audience and the show has long been awaited in the UK.

Earlier this year there were two sell-out concert performances at Drury Lane Theatre. Now there is a full-scale stage production at the Arts Theatre, excellently directed by Nick Winston and excellently designed by Philip Whitcomb.

The fans were out in force and sounded like a clique, cheering every number. The melodic songs, country, gospel and rock, are very enjoyable. As in the movie, there is a great deal of empathy and feeling sorry for the couple, two dreamers, bored with their lives and poverty and seeking a better and more exciting life.

There are pleasing performances from Frances Mayli McCann and Jordan Luke Gage as Bonnie and Clyde and good support from George Maguire as Clyde’s brother and Natalie McQueen as the brother’s wife.