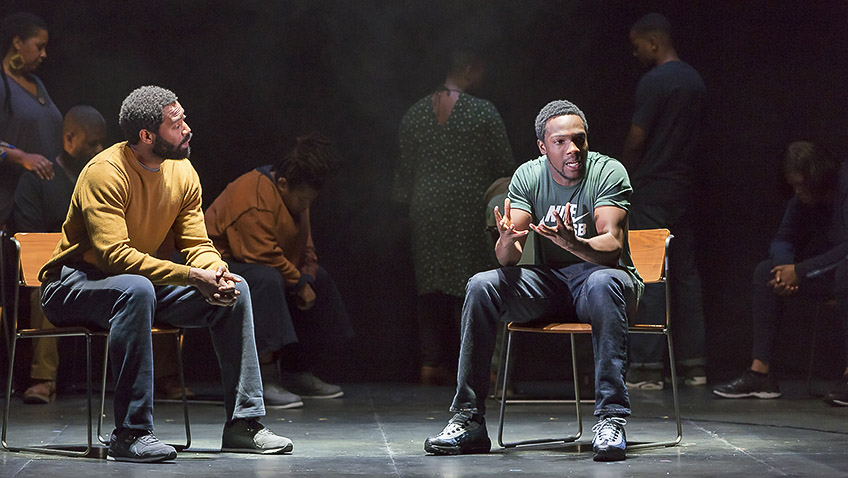 Patience is running out, times have changed and progress isn’t enough

British playwright, screenwriter and director debbie tucker green always writes her name and the title of her plays in lower case.

She likes to push the boundaries. She wants to reflect life on stage. She writes prose which sounds like poetry.

ear for eye, which she also directs, explores ingrained racism in the USA and UK and features 16 actors in 20 short scenes, mostly monologues and duologues, not all of which are instantly accessible. 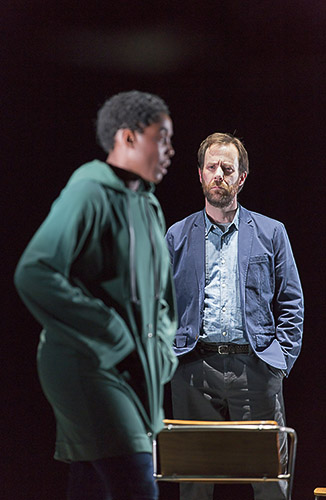 Lashana Lynch and Demetri Goritsas in ear for eye

tucker green offers snapshots of lives in the black community and shows how equality is an ongoing battle against power, privilege and patriarchy.

There are parental lessons in how not to look threatening. The first is in the US and has a son (Hayden McLean) showing his mother (Sarah Quist) a wide variety of gestures, all of which his mother dismisses, saying they will get him into trouble. The scene is later repeated in British sign language with Jamal Ajala.

For many blacks patience is running out. Times have changed and progress isn’t enough. A young man (Tosin Cole), lashing back at the backlash lashing him, expresses his anger in the strongest terms to his mentor (Nicholas Pinnock). He wants direct action not demonstrations. “Give me one reason not to,” he says.

There is also an impressive performance is by Eric Kofi Abrefa as a British black who is questioned by the police and accused by them of being provocative and aggressive when it is the policemen who are being verbally and physically abusive, forcing him to strip to his boxers and humiliating him.

The longest scene and the most accessible is a confrontation between an academic psychiatrist (Demetri Goritsas), a white man, the only white man in the whole production, and a pupil (Lashana Lynch), a black woman. They are talking about white teenagers shooting black teenagers in high school, a domestic home grown act of violence on a large scale which ended with 19 dead.

The psychiatrist seeks to undermine the pupil and override her at every opportunity in the most patronising manner, making excuses for the killer, blaming the boy’s parents and saying he was psychologically damaged at 12 years old. Both actors are excellent.

ear for eye lasts just over two hours without interval and ends with a documentary film in which Caucasian actors and non-actors read out laws from the Jim Crow laws in the US and the British slave codes. The punishments are horrendous: whippings with rods and straps, burnings, imprisonment, hard labour, ear-cutting, nose-slitting and death sentence.