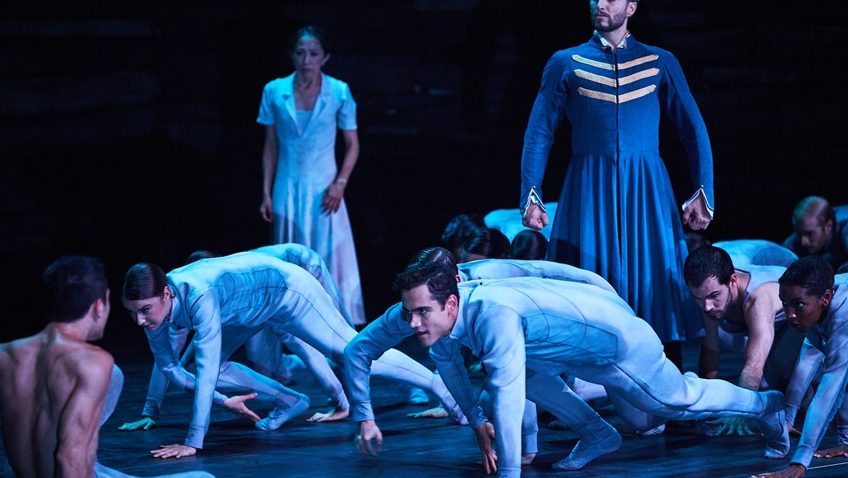 Akram Khan’s Creature was due to premiere in Spring 2020 but covid put a stop to that. Khan, who has worked before with English National Ballet on a brilliant updated Giselle, a modern classic, now takes his inspiration from a novel by Mary Shelley, a play by Georg Buchner and a poem by Lord Byron called Darkness.

Creature owes something to Frankenstein and Wozzeck. The setting is a remote archipelago in the High Arctic in the near future. The story-line lacks clarity and characterisation and I made a big mistake when I did not read the synopsis beforehand.

The Creature, evidently, is being used for experiments in a science fiction military brigade research station. He is being tested for his mental and physical ability to adapt to extreme cold, isolation and homesickness. He falls in love with a cleaner (a Cinderella figure with a mop) and intervenes when a major attempts to rape her.

The choreography has the Akram Khan stamp; but it is Vincenzo Lamagna’s pulsating apocalyptic, over-amplified music and sound design, including a distorted Ravel’s Bolero, which makes the most powerful impact.

The role of the naïve and vulnerable Creature does not offer Aitor Arrieta the dramatic opportunities Boris Karloff had in the 1931 film, Jens Jorn Sonntag had in the Robert Wilson/Tom Waites/Kathleen Brennan version at the Barbican in 2002 and the naked Johnny Lee Miller had at the National Theatre in 2011

The final image of a huge log building falling around the Creature needs more logs to fall to be truly awesome.