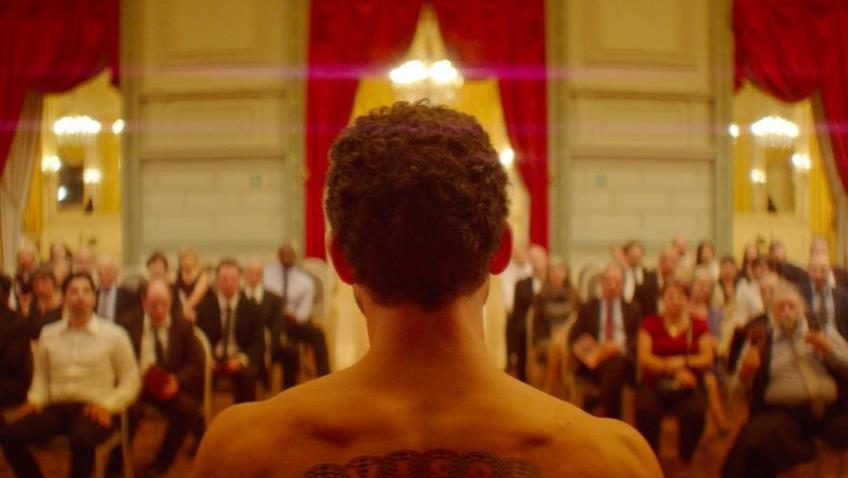 A love-sick refugee is caught up in the high-end conceptual art world in Tunisia’s thought-provoking first Academy Award nominee.

If you thought Ruben Östlund’s 2017 The Square was the definitive send up of pretentious, morally-challenged, conceptual art, here comes writer-director Kaouther Ben Hania’s The Man Who Sold His Skin – Tunisia’s first film to be nominated for an Academy Award (Best International Film 2021).

If that’s not enough, the film’s political dimension is hard to ignore. The premise of this beguiling, if cacophonous film is that a Syrian refugee Sam (Yahya Mahyni) avoids leaking boats and freight trucks, by traveling to Europe as an object of art. In a Faustian pact with the Mephistophelean Damian Hirst like artist, Sam becomes the visa.

Ben Hania makes the most of what at times looks like an insufficient budget: she gives us a provocative subject; a clever moral dilemma, and a pair of actors whose portrayal of star-crossed lovers is so fresh and convincing you cannot believe they are acting. Not many films are so generous. Cinematographer Christopher Aoun enhances the film with some clever camera angles and space making sweeps of a museum and galleries and there is a fitting tonal score from Amine Bouhafa.

Ben Hania introduces us to the 20-something, Western-dressed lovers from Raqqa only to separate them. The beautiful and strikingly elegant Abeer (Dea Liane) from a wealthy family, and the charming, emotionally uninhibited and impulsive Sam (Mahayni) from a humble background, flirt cautiously on a train.

When, in this delightful opening, Abeer softly declares her love, Sam’s overenthusiastic public response gets him hauled off for police questioning (we see a picture of Assad over the police desk) over the decency laws. Sam knows enough not to count on a fair trial. After he escapes through a window, his sister (Najoua Zouhair) smuggles Sam into Beirut before he can say goodbye to Abeer. With no word from Sam and feeling abandoned she loses hope of happiness. In the torn country’s political turmoil, security becomes everything. Abeer, it seems, did not put up a fight when she is pushed into marrying Ziad (Saad Lostan), a diplomat working in Belgium.

Living a miserable, illegal existence in Beirut, Sam hears the news and is determined to get to Belgium to save his “girlfriend”. He might be the one who needs saving but imagining Abeer in an unhappy arranged marriage is more than he can endure.

Just when things could not get worse, he is plucked from obscurity by a celebrity artist, Jeffrey Godefroi (Koen De Bouw) after he sneaks into an art gallery opening of an Godefroi exhibition after spotting the buffet through the window.

Sam tries to blend in with the crowd, but he looks too desperate. Poor, but proud, when Godefroi’s assistant, Soraya (Monica Bellucci in a blond wig), offers Sam a food parcel, he tells her where to go.

But can he resist Godefroi’s offer? Soraya’s boss is not so quick to send this desperate man packing. This Mephistopheles does not want Sam’s soul, he wants a pound of flesh. Sam will sell his back to the artist for a share of the “art work’s” price. The tattoo is, figuratively if not literally, his visa to the world.

And before you object that the premise is too far-fetched even for its metaphorical value, in 1997 Belgium-born, Brighton based artist Wim Delvoye started tattooing live pigs, amused at the idea that the pig – the work of art – would literally grow in value. If Sam slams the door on the human rights group hoping to stop this exploitation by turning Sam into a cause celebre, we are invited to consider whether the tattoo is a form of liberation or enslavement. You can go further: is Godefroi any better than the people traffickers?

In the final quarter, Ben Hania loses control of the story with a few too many twists, one of which takes place off screen and loses its impact as a result. Sam’s defiant rebellion after an auction is reminiscent of the charity dinner scene in The Square, where another bare-chested underdog roars, but with less impact.

All along, however, Sam keeps his eye on the prize, and Abeer, trying to keep up with her true love’s strange predicament, is his for the taking. And light weight though it may be, The Man Who Sold his Skin gets the audience thinking. If Magritte’s realistic representation of a pipe on flat canvas is entitled, This is Not a Pipe, can the same be said of the visa painted on Sam’s back?