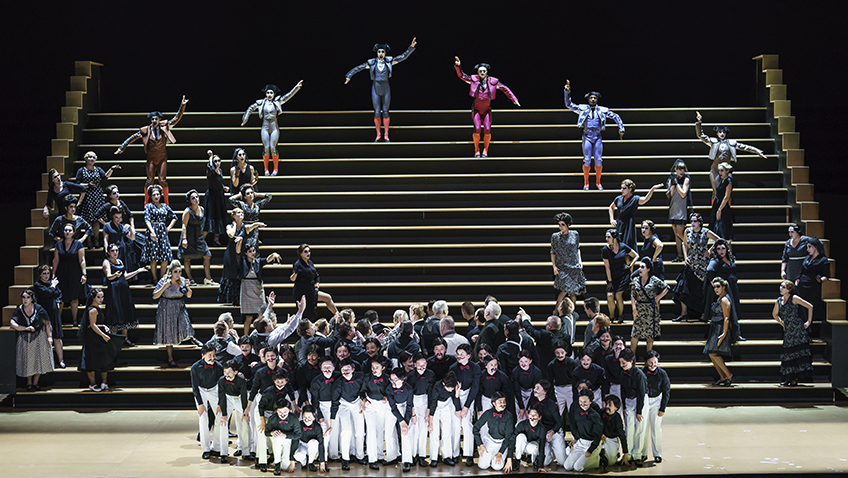 At its Paris premiere in 1875 the French critics thought the opera, an adaptation of Prosper Mérimée’s novella, scandalous and obscene. They dismissed Bizet’s music as garish. The production played to poor houses.

Bizet died three months later, aged 36, unaware that he had composed one of the world’s most popular operas. Lurid crimes passionnels have always been good for the box office.

There have been many revivals and re-workings not only in opera but also in ballet and film. I much enjoyed John Copley’s long-running production for ENO, Oscar Hammerstein Carmen Jones with an all black cast, Harry Belafonte, Dorothy Dandridge and Pearl Bailey, Francesco Rosi’s film with Julia Migenes­ Johnson, and choreographer Antonio Gades’ and film director Carlos Saura’s flamenco version. 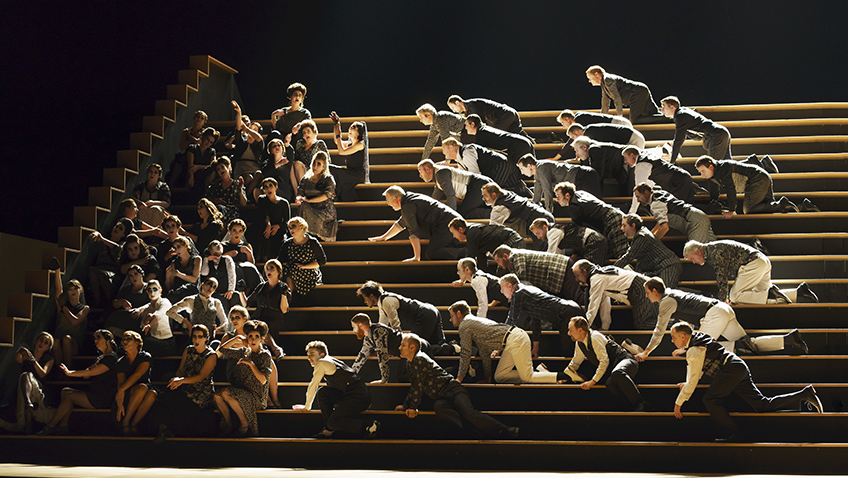 The set is a giant 16 step stairway, which fills the whole stage. The stairway will for many people bring back memories of Broadway musicals, 42nd Street in particular, the Follies Bergere, the Ziegfeld follies, Georges Guétry singing I’ll Build a Stairway to Paradise and even curtain calls in Christmas pantomimes.

The ROH chorus make their entrance rushing down Katrin Lea Tag’s stairway and behaving as if they are re-creating the massacre on the Odessa steps as seen in Sergei Eisenstein’s Battleship Potemkin. You feel somebody might at any minute trip and fall or be shot by Cossacks.

There is no tobacco factory, no cigarette girls, no soldiers no tavern, no smuggler’s hideaway in the mountains and no bullring exterior. There is just the stairway and a huge number of people on it. The cast includes an extra chorus, eight energetic dancers and two children’s choirs, all brilliantly directed and having a striking visual impact. 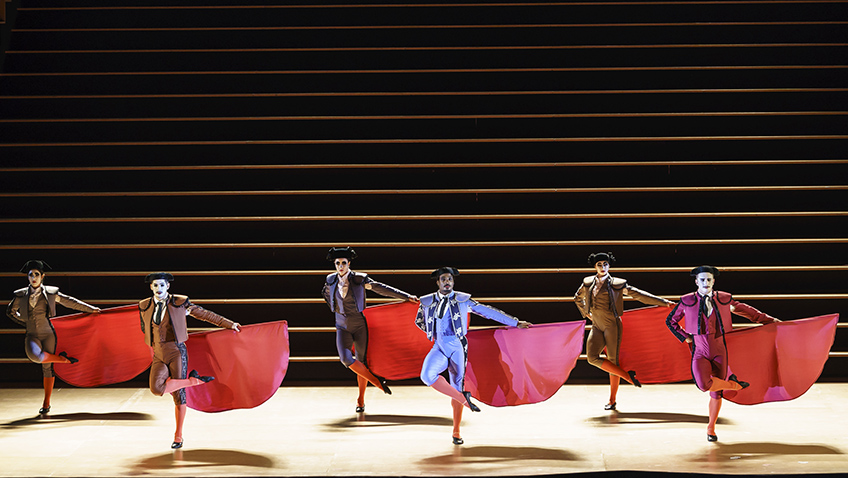 Carmen (Anaïk Morel) makes her entrance in a gorilla suit. Filmgoers will get the reference to Marlene Dietrich in Josef von Sternberg’s Blue Angel. Theatregoers will probably remember Joel Grey and the gorilla in the Kit Kat Klub in John Kandar and Fred Ebb’s Cabaret.

Carmen takes on many guises, starting as an androgynous toreador, and none of them is a sultry gypsy. Don José (Bryan Hymel) is a loser right from the beginning. Toreador Escamillo (Luca Pisaroni) has only to walk on to get a hysterical welcome from all the girls.

Audiences will come out of the opera house talking about the production and the dancing. The big energetic routines and hand-jiving, wittily choreographed by Otto Pichler, contribute so much to the entertainment. Yasset Roldan stands out.

Ailyn Pérez as Micaela, the girl Don José should have married, wins the most applause and deservedly; her arias are particularly beautiful.

The only time the actual story is emotionally involving is in the final act when Bizet, singers and orchestra up the stakes. The children in their black jumpers and white trousers uniform line up at the edge of the stage and jump up and down in unison in time to the music cheering on the toreadors. In the bullring Morell wears a gown with an enormous and fantastic train which covers much of the stairway. Hymel pleading with her not to leave him is a genuinely pathetic figure.

The major weakness of the production is that the story-line is not clear. Those who do not already know the story would be well advised to read the synopsis in the programme before the curtain goes up.