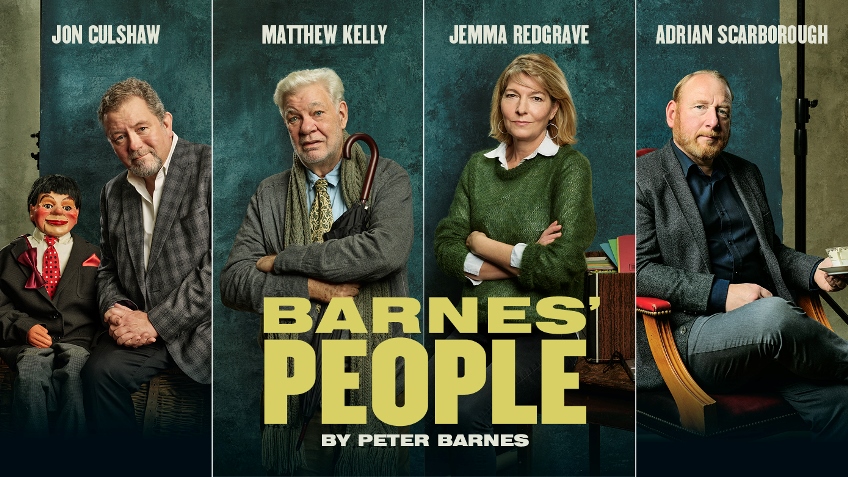 Original Theatre Online is now reviving four of them for the first time in 40 years. The actors, directed by Philip Franks and Charlotte Peters, were filmed at Theatre Royal, Windsor. Each monologue lasts about twenty minutes.

Adams visits the unkempt grave in a poor man’s cemetery he runs to have a last talk with his best friend who died all alone. Adams, once a dedicated doctor who truly cared for human beings, has lost his faith, his hope and his touch. He is bitter about the lack of respect for the graves of the poor. Barnes’ prose is rich in poetry.

Dr Rosa Hamilton is in charge of four residential homes and 600 patients. For 20 years she has batted with the authorities to alleviate the misery and suffering of those who are no longer capable of looking after themselves. Rosa, deeply committed, overstretched and overwhelmed, rails against an inane and brutal system and the indifference of society to geriatrics. Barnes’ anger is palpable.

A ventriloquist and his dummy have a long-standing Cain and Abel relationship. Billy may be just a plank of wood but the ventriloquist, haunted by issues and mental illness, needs him to talk him through and out of his boredom and instability and get on with life. Without Billy he would be nothing. Jon Culshaw is an impressionist.

The BBC never broadcast this monologue. This is its first performance. Leslie has worked at Buckingham Palace for 30 years as a footman and risen through the ranks to become the first door opener at banquets. He has all the necessary qualities for the job: obedience, humility, silence, deference. He is proud to be servile. Adrian Scarborough is subtly comic. The quiet, confidential, smug tone is perfect. There is a good silent joke after the monologue is over.

The actors are excellent. I do hope Original Theatre Online will revive some more of Peter Barnes’ monologues.