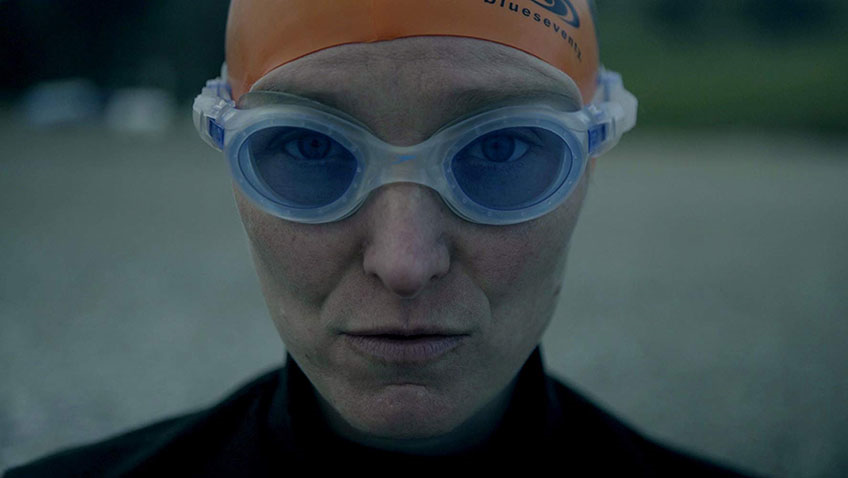 An unmissable film for open water swimmers and single mums

Against the Tides is a documentary that no wild swimmer, endurance sports fan or single mum will want to miss. Originally reviewed for Mature Times in May, 2019 when the film had a limited theatrical run, it is now being offered on demand where it will find the audience it deserves. When it comes to sacrifices and missed childhoods, hardship and tough choices, the image of little Tom Daley comes to mind. But few thoughts go to the adult athletes, an oversight that Against the Tides might reverse.

Although Somerset-born marathon swimmer Beth French is not as famous as double Olympic Gold rower James Cracknell, the two have more than their obsession with endurance sport in common. Cracknell made the news recently for choosing rowing for Cambridge at age 46 over his wife and children. In Stefan Stuckert’s compelling documentary, when 38-year-old Beth French sets out to become the first person in history to complete the Oceans Seven challenge in one year, she has to juggle her dreams and goals with the needs of her 8-year-old son, Dylan.

Completing the Oceans Seven challenge involves travelling the world to conquer seven open water channel swims. Only six swimmers have completed all seven in a lifetime, and only one woman managed four in a year.

To get into the record book, a swimmer must tackle the North Channel (Ireland), the Cook Strait (New Zealand), the Molokai Channel (Hawaii), the English Channel, the Catalina Channel (California), the Tsugaru Strait (Japan) and the Strait of Gibraltar (between Spain and Morocco) without touching land or any human being. Food and drink, attached to the boat by a rope, are thrown out to the swimmer who treads water long enough to replenish the energy expended.

The film opens with a choppy expanse of sea and a yellow bathing cap emerging in between the swells. If the water looks inviting and you long to dive in, the feeling will not last.

French’s narration tells us that from childhood, she could never look out at a body of water without wanting to swim to the other side. ‘Being in water gives me freedom…it’s where I belong,’ she says, and when you see her smile of elation as she crawls up on the beach or rocks after a gruelling swim, you believe it.

We follow French as she prepares for, and embarks on, her record book challenge. There are more obstacles than just the distance. These include jellyfish, sharks, strong currents, heavy boat traffic (the strait of Gibraltar, for instance), very cold water, and the risk of hypothermia as competitors must swim without a wetsuit and only a regular swimming costume, cap and goggles. It must also be daunting pushing off in the middle of the night (11:30pm for the Catalina Strait) to be able to “swim into the light”. Since a swim can take up to 20 hours, and winds often pick up at a certain time in the day or night, you cannot set off when you feel like it.

Even more critical, however, is the weather forecast. After travelling to Northern Ireland with her crew and making arrangements for the boat for the North Channel swim, Beth is forced to cancel when the forecast is for storms and 35mph winds. Naturally, this cancellation is a major setback, not only for the time lost, but financially. Money for the boat, airfare and hotel must be paid regardless of whether the swim goes ahead. French discusses the financial burden of the challenge (estimated at £83,000). She is a self-employed masseuse but spends most of her time on land as her own PR person and public speaker to fund-raise for the trips. While French’s stamina is almost super-human, it is all the more astonishing when we learn that she was struck with glandular fever at the age of 10 and diagnosed with Chronic Fatigue Syndrome (ME) at 17. French remembers sleeping all the time and waking up in a fog. Her frailty was such that she was forced to use a wheelchair to get around.

For each swim, we are given the specific obstacles French might face and are kept appraised of how many miles and hours have passed and how many remain. With this information in mind, it is thrilling to watch French swim and to observe her interaction with Project Support Assistant, Ella, or the captain at the helm. We hear from French’s mother who worries about her daughter and helps out with Dylan, but admits he is hard work. We also meet French’s father and supportive sister who talk to her via Skype while she is in New Zealand to swim the Cook Strait between New Zealand’s North and South islands. Swimming in strong currents between the Tasman Sea and the Pacific Ocean, French reaches shore in just over 9 hours.

During the 21-mile Catalina swim (between the San Pedro Peninsula and Emerald Bay, Catalina Island), French’s speed has dropped to ½ mile per hour. After ten hours, with six miles remaining, the team discuss pulling the plug on this attempt. Some swims go much better and allow French to enjoy herself. This is the case with the 4 1/2 hour swim across the strait of Gibraltar and, despite the long distance (28 miles) and currents, the Molokai Channel in Hawaii (she bettered her time from 2012). The water might be warm but French still faces waves, currents and sharks. But it is after the Molokai challenge that French is preoccupied with thoughts of Dylan. He is home-schooled and often accompanies French on her travels to complement his education. But Dylan has started hiding her bathing costumes in a protest that his mother cannot ignore.

With two months left to complete the remaining three swims, French sets off to the Tsugaru Strait with increased concerns about Dylan’s increasing violence (he will be diagnosed with autism). As a single mother, ‘I wanted to show him you can fulfil your potential at any stage in your life’, French says, determined to set an example for her son. Yet the long swim has given her time to confirm her priorities. There is real tension and heartache at this point as we join French’s support team in urging her on through the last six miles.

You can watch the film trailer by clicking here.