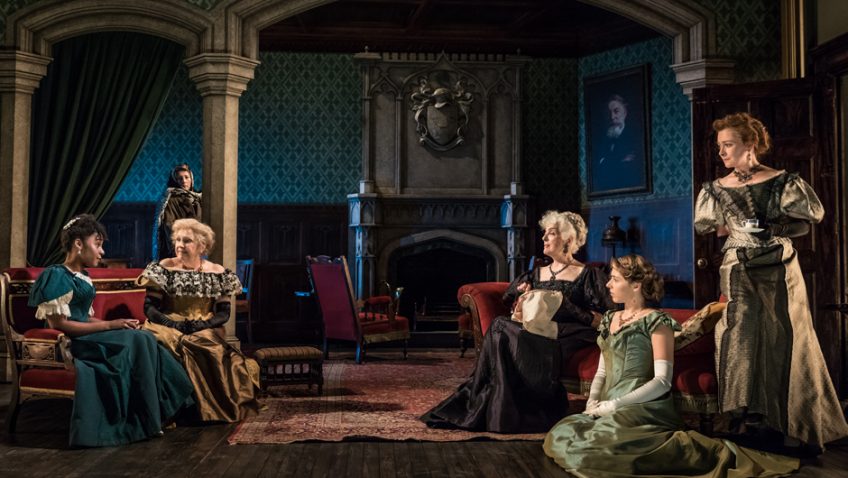 Robert Tanitch reviews A Woman of No Importance at Vaudeville Theatre, London WC2

Dominic Dromgoole has formed a new theatre company, Classic Spring, and his first season is devoted entirely to the plays of Oscar Wilde.

At the premiere of A Woman of No Importance in 1893 there were cries of Author! Author! Eve Best in A Woman of No Importance

A large gentleman rose in one of the boxes. “Ladies and gentlemen, I regret to inform you that Mr Oscar Wilde is not in the house.”

The large gentleman spoke with authority. He was Oscar Wilde.

The play is a satire on English society and its lax morality, its hypocrisy and its Victorian double standards of one law for men and another for women.

His mouthpiece is a young American woman, a puritan, who believes that a woman who has sinned should be punished and that the sins of the parents should be visited on the children.

In any battle between puritans and profligates you might expect Wilde to be on the side of the sinners; but here the puritans rout the profligates completely.

The play, which takes a long time to get started, has always had a bad press ever since its very first performance; but the theatregoing public has always enjoyed the mixture of Victorian melodrama and epigrams.

In the first act the actors, noticeably very cramped for space, just sit around swapping paradoxes and gossip. There is absolutely no action at all. Oscar thought it a perfect act.

Eve Best as the woman of no importance looks a tragic figure and is completely unfazed by the melodrama and copes admirably with it. Fortunately, some of the over-the-top Biblical rhetoric has been cut.

Dominic Rowan and Emma Fielding are not so adept with the cynical, despicable corruptor of youth, Lord Illingworth, and the worldly Mrs Alonby, direct descendents of the wicked Vicomte de Valmont and the wicked Marquise de Merteuil.

Anne Reid is amusing as the empty-headed, absent-minded Lady Hunstanton, who when inebriated is liable to step in front of the curtain and sing sentimental ballads during scene changes.

Eleanor Bron has the measure of Lady Caroline and Harry Lister Smith is good casting for naive Gerald, who insists his mother has no alternative but to marry the man who seduced and deserted her twenty years previously.

William Gaunt and William Mannering are overacting far too much and need to be reined in.

The biggest laugh of the evening is the curtain to Act Three when Gerald is just about to throttle Lord Illingworth and his mother cries out, “Stop, Gerald, stop! He is your own father!”

Audiences, even in 1893, found it difficult to take the exhortation seriously and reacted in the same way as they had to the immortal line, “Dead! Dead! And never called me mother!” in East Lynne.