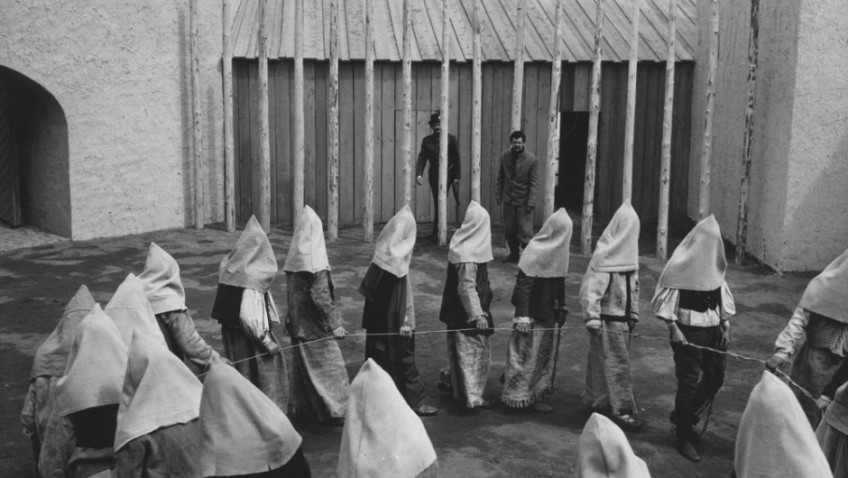 Hungarian director Miklós Jancsó’s anti-war/anti-heroic films made a tremendous impression in the 1960’s with their stark brutality, arbitrary executions and harsh poetry.

It’s good to know that his best films still have a tremendous impact and relevance today. The camera work, striking in black and white, is amazing in its framing and the virtuosity of its lengthy travelling shots which cover vast landscapes.

Jancsó takes a sharp, cold-blooded, uncompromising and damning look at man’s abuse of power and how the roles of oppressor and oppressed can change in an instant. Kill and be killed

THE ROUND-UP (Second Run), filmed in 1965 and Jancsó’s masterpiece, is set in 1840. A stockade stands in the middle of a flat and bare landscape. Austrian soldiers round-up, interrogate and torture the rebels. One man is told he will not be hanged if he can find somebody who has killed more people than he. A psychological game of deceit is played out by the captors and the captives.

THE RED AND THE WHITE (Second Run), filmed in 1967, is set in the Civil War in 1919 in the aftermath of the Russian Revolution. The Reds are Communists and the Whites are Tsarists, government soldiers. The Hungarian irregulars side with the Reds. There are constant shifts of power. There is no mercy. The Russian authorities, still mindful of the Hungarian Uprising in 1956 during the Cold War, not surprisingly, banned it.

RED PSALM (Second Run), filmed in colour in 1972, is very stylized and full of long takes. The subject is political suppression. There are a series of agricultural uprisings which lead to a grand massacre. The emphasis is on solidarity of the workers, the linking of arms and dancing, and the workers’ cry for freedom. The film is very much a socialist sermon and the verbal high spot is the re-writing of Lord’s Prayer as a Socialist’s Prayer.