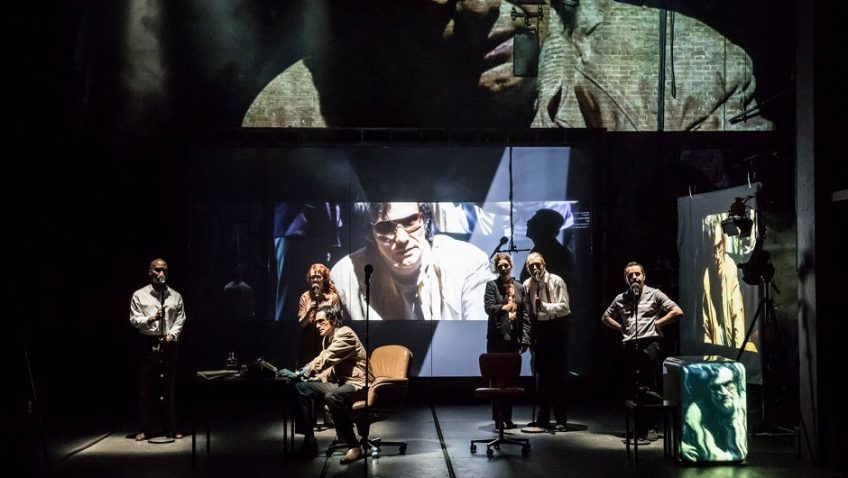 The rise and fall of Hollywood mogul Robert Evans

If you are a Hollwood buff, you will almost certainly have already read “bad boy” Robert Evans’s racy autobiography.

The Kid Stays in the Pictures, published in 1994, traces his rise and fall and rise again. It is generally agreed to be one of the best insider memoirs of Hollywood.  He spares nobody, least of all himself. “It’s irreverence that makes it sizzle,” he has said.

Evans started as a so-so actor and appeared in Man of a Thousand Faces and as the matador in The Sun Also Rises. He went on to become the head of Paramount Pictures and a legendary Hollywood mogul.

He was the producer of The Odd Couple, Rosemary’s Baby, The Godfather, Love Story and China Town. Divorce, cocaine and scandal brought him down.

The adaptation and direction of his autobiography is by Simon McBurney and James Yeatman.  McBurney and Complicite have done some terrific stage work in the past.

Five out of the eight members of the cast are American. So perhaps there are already thoughts of performing Off-Broadway.

Technically, the production is clever. Multi-images are projected on to screens. There are clips from famous films. Live action is filmed and projected. The actors play many roles. No one actor plays Evans.

The actors speak into microphones. There are lots and lots of telephone calls. Darryl F Zanuck bawling and Marlon Brando mumbling are good for a laugh.

If Zanuck, Brando, Shearer, Gardner, Farrow, Nicholson, Pacino, Polanski, MacGraw and Kissinger dpn’t ring any bells, then this production is probably not for you.

Evans comes vividly to life on the page. His writing has a distinctive, candid, shameless, self-promoting, take-all-the-credit, ****- me-all style.

Evans’s text would work well as a stand-up monologue. There has already been a documentary with photographs and brief footage. A total film now with a star performance might be a better idea.

At the Royal Court Evans is in the picture playing a supporting role to the technology. And so are the other members of the cast.