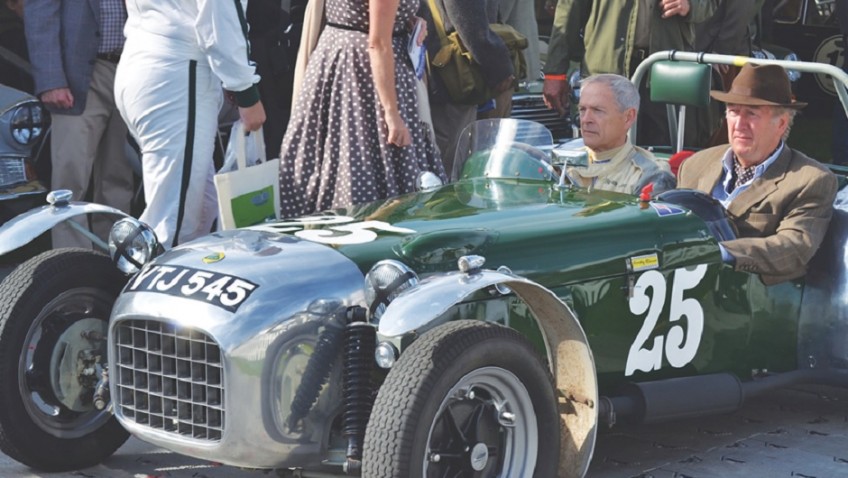 I’m looking at a 1950s car my father owned and glammed up in a 1950s dress complete with net underskirt and it’s making me feel part of history.

For one weekend in September, the golden era of motorsport’s glorious past is recreated at the Goodwood Revival. Everything within the perimeter of the Motor Circuit is transported back in time to the 1940s, ’50s and ’60s – including the spectators, who are encouraged to join in the fun and dress in authentic period costume.

The Revival is the world’s biggest and best historic motorsport event, with 15 races drawing 150,000 spectators to the beautiful West Sussex circuit. Held over three days in September, the Revival recreates Goodwood’s glory days as a fixture on the international motor racing scene between 1948 and 1966.

During World War II a large area of farmland developed as the Royal Air Force Westhampnett fighter base became a centre of historic aircraft action during the 1940 Battle of Britain. After the war, the RAF closed its operations and returned it to the Goodwood Estate.

The late Freddie March adapted the disused aerodrome perimeter tracks for motor racing, which led to the opening of the Goodwood Motor Circuit in 1948. Over the next 18 years, the circuit became one of the most popular and prestigious in the world, before closing its doors to contemporary motor racing in 1966.

Exactly 50 years to the day since the opening of the Goodwood circuit, the present Earl of March sanctioned the first Revival meeting in 1998.

The vehicles competing in the Revival all date from that period; the newest vehicle is almost half a century old, and some are worth tens of millions of pounds.

But the Revival doesn’t just appeal to motorsport fanatics. It is also the world’s biggest vintage culture event, with the entire circuit decked out in the styles of the period. Fashion and cars have long been intrinsically related – that era of motor racing was simply gold and full of glamour. Thousands of visitors were dressed in period clothing, channeling the essence of the  ‘40s, ‘50s, ‘60s and ‘70s – everything from Rockers to British Army officers.

The food, the live jazz, swing and rock ‘n’ roll, and the shops will make you think you’ve stepped back in time to be in one gigantic film set. The time when the sun always shone on the righteous, the good guys won and adventures were safe.

This year there was special tribute to racing legend Bruce McLaren and, as always, a host of famous names, both racing and trackside such as Theo Paphitis of Dragons’ Den and the chef, James Martin.

Away from the track the regular Freddie March Spirit of Aviation exhibition marked the 75th anniversary of the Battle of Britain with a display of 30 British warbirds.

Each year the tickets for this popular event are sold out by the beginning of the summer – so plan now for the great step back to the past future event.