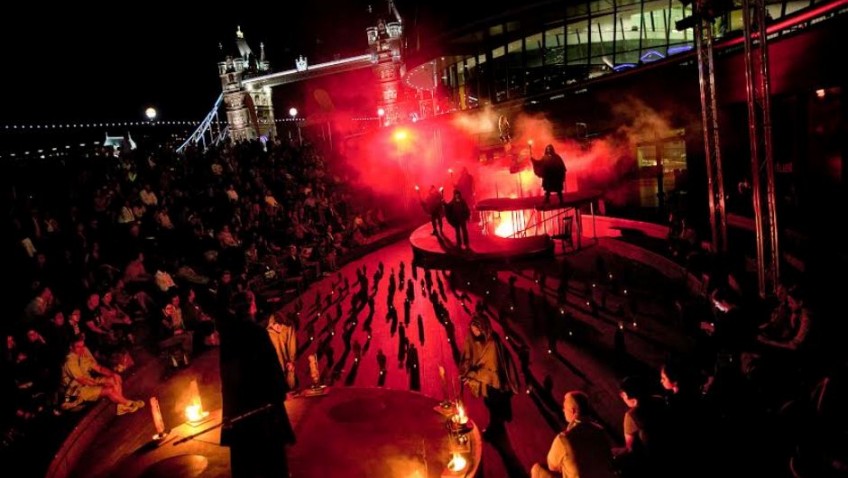 The ring cycle without Wagner’s music

The Scoop is an open-air sunken amphitheatre on the South Bank of the Thames, just along from Tower Bridge, and right next door to the Mayor of London’s office.

The Scoop provides free entertainment from June to September for audiences who don’t normally go to the theatre. No tickets are required. There is no need to book. You just turn up on a first come first served basis. There is seating for 1,000.

Gods, mortals, valkyries, Rhine-maidens, giants and Nibelungs have been fighting for the ring for aeons. The first time all four operas of Richard Wagner’s Ring Cycle were seen together was in 1876 at the very first Beyreuth Festival.

Wagner’s epic is spread over four nights with a total playing time of 15 hours.

Phil Wilmott’s production can be seen on one night and lasts just 4 hours and 15 minutes; and that includes one interval of 30 minutes and two intervals of 15 minutes.  He manages to cut the running time by getting rid of Wagner’s music completely. The production is not meant as an alternative. It is something in its own right.

The Ring Cycle could work without Wagner if it had the right script, the right actors, the right director and the right designer. But the libretto is not good enough on its own. The acting is under par and the staging is trivial.

Audiences can come and go as they please; and they do all the time, which can be distracting for those who are actually trying to concentrate on what is being said.