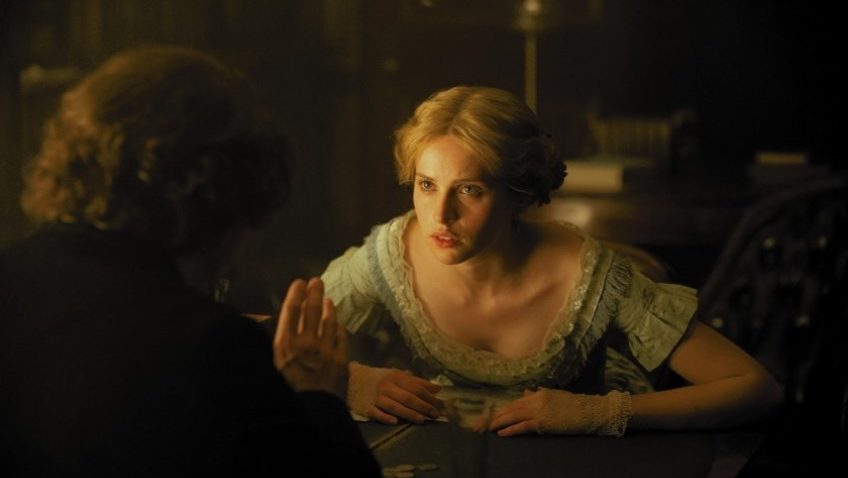 Ralph Fiennes stars in the period film The Invisible Woman

Ralph Fiennes (Coriolanus) directs and stars in this double biopic based on Claire Tomalin’s book, The Invisible Woman: The story of Nelly Ternan and Charles Dickens.  The laboured script by Abbi Morgan (The Iron Lady, Brick Lane) provides the historically accurate facts, occasionally in expository fashion; and, as is expected of British heritage films, the sets, costumes and acting cannot be faulted.

Fiennes effectively conveys the message that, in Victorian England, women of all classes were second-class citizens at best, and often mere chattels.  But Morgan and Fiennes have missed the real story that could have made the story of yet another kept woman more interesting.

Ellen (Nelly) Ternan (Felicity Jones), daughter of the famous actress Mrs Ternan (Kristin Scott Thomas), is the least talented of Mrs Ternan’s daughters, her actor husband and a son having died before the story begins.

That doesn’t stop Charles Dickens, an enthusiastic theatre director in his spare time, from casting the pretty 18-year-old in his production of Willie Collins’ (Tom Hollander) The Frozen Deep.  A practical realist, not to mention a successful actress, Mrs Ternan facilitates the inevitable affair despite the 27-year age gap.  She gambles on Dickens’ patronage, social standing and discretion outweighing the shame should the affair go public, not to mention the diminished future prospects that a ‘damaged woman’ could expect.  After all, Dickens is married with a large family and is  a respected member of society, and so has nothing to gain from a scandal.

Fiennes exercises admirable restraint in refusing to portray the relationship as a hot, passionate romance, but he never shows us what made Charles and Nelly compatible enough to sustain a 13-year relationship.  Dickens was so popular in the 1850s that beautiful, bright women queued to meet him and he was not known for his fidelity. Why her?  Nelly does not come across as an intellectual, nor is she a barrel of laughs.  Moreover, she seems more awe-struck and flattered than in love – although that might be what Dickens needs.

Catherine (Joanna Scanlan), Dickens’ wife of 22 years, and the mother of his 10 children, is portrayed as a fat, party-pooper, but who wouldn’t be after expending so much energy enabling Charles’ remarkable physical, creative and prolificacy. Keeping up with Charles when you have ten kids is not easy and Catherine’s role in life is to give him the space to go on being Charles Dickens.

The film comes alive in the scenes where emotions and ideas are dramatised instead of talked about. In a devastating scene, Catherine learns of Dickens’ decision to leave her by reading an article that he had published in the Times. He announces his separation from his wife while denying the potentially damaging rumours about a mistress.  Curiously, we are never really shown Nelly’s reaction to Dicken’s cruel PR stunt.  As a woman, Nelly must have felt something, even if she is too young and obsessed to foresee her own fate.

When an expensive bracelet, clearly intended for Nelly is, accidentally or intentionally, delivered to Catherine, Catherine hand delivers it to her younger rival. Of all the scenes in the film, this is the one that resonates beyond history and might bring a tear to your eyes. But our emotion is for Catherine, who, literally boarded up into a nun’s existence by Dickens, ironically, becomes the eponymous invisible woman, or, at least, a second one.

The film is structured as a long flashback, although we are popped back and forth a couple of times from the present,1885, to the beginning of the affair in 1865.  In 1885, an emotional Nelly pours out her long-repressed secret to Reverend Benham (John Kavanagh) a contrived, but convenient, vehicle planted in the story for our benefit. We see Nelly (her hair darker but otherwise, not a day older), now a busy school teacher assisting her headmaster husband (Tom Burke) and coincidentally he is directing a symbolic school play co-starring their son.

For Tomalin, the crux of the story was not that a Victorian girl with few marriage or career prospects would become a kept woman, but that Nelly turned her life around upon Dickens’ death. It is left for us to imagine how she managed to change her identity, marry a kind, educated husband her own age and give birth to a healthy son (in the film, she has a still born baby with Dickens).

Although not alluded to in the film, Nelly’s acting experience must have facilitated her conscious effort to transform herself into marriage material by lying about her age and background. One suspects that Nelly’s journey to reinvent herself might have been a more novel and involving film and might have made her a more interesting character.  Instead this transformation is only hinted at, and we are left with the rather bland and ambiguous adulterous  relationship shown in The Invisible Woman.