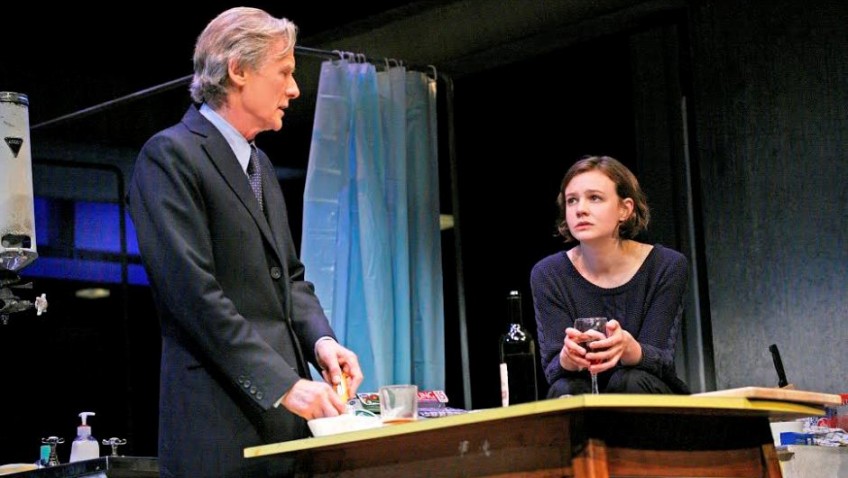 A play for those who enjoy a good involving debate

David Hare’s Skylight is another of his state-of-the-nation pieces but at a much more intimate level than his epics. The play is one of his best and it gets a fine revival from Stephen Daldry with a cast headed by Carey Mulligan and Bill Nighy.

Kyra lived with Tom and his wife and for six years and it was a happy arrangement until Tom’s wife discovered that he and Kyra were having an affair. Kyra left the house immediately. Three years later 50-year-old Tom turns up at her bleak, freezingly cold council flat in North London. His wife has died of cancer and he wants to renew the relationship.

Kyra, now 30, is a dedicated and compassionate maths teacher in a tough comprehensive school. Tom, a highly successful restaurateur, is appalled that she should be sacrificing her life in this way. “Why are you fighting so hard to get into what everybody else is fighting to get out of?” he asks. But then he has this habit of writing people off, especially social workers and teachers whose job it is to clear up “society’s rubbish”.

The mixture of love and politics works well. The second act becomes a debate between the public and private sector, an argument between entrepreneurial materialism and self-denying idealism. The debate is as relevant today as it was when Bill Nighy first assayed the role in 1997 which he took over from Michael Gambon who had created it.

Nighy has Tom’s arrogance, self-absorption and raffishness; restless, he prowls the stage continuously, a chauvinist bully. Carey Mulligan, calm and self-contained, underplays and stands up to him. The audience remains firmly on her side.