Home / LIFESTYLE / REVIEWS > / THEATRE REVIEWS / People in modern Russia are still spying on each other, betraying each other…. 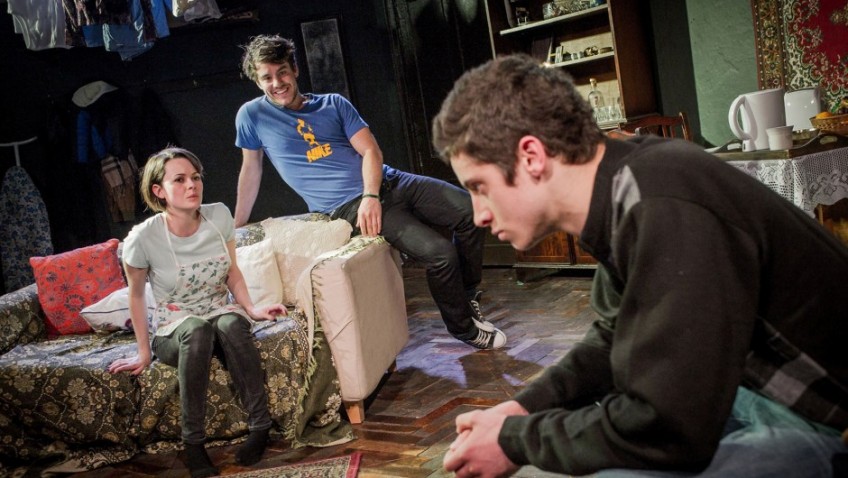 People in modern Russia are still spying on each other, betraying each other….

Moses Raine’s play takes place in an over-crowded sitting-room of a very small flat in Moscow today. There are eight people living there: grandfather, his son, his son’s wife and their three children, plus a girl friend, a colleague and an English visitor.

There is no privacy. They get on each other’s nerves. They wind each other up. They quarrel. There’s a lot of emotion coming out in the open. Does happiness exist?  “What am I doing with my life?” cries the unhappy daughter (Lisa Diveney), emulating Chekhov’s Irina.

“Life is miserable without forgiveness,” observes the grandfather (Patrick Godfrey), who is a bit of a hypochondriac.

The older members of the family remember times gone by during the the Communist era when things were really bad and they couldn’t talk freely, even in their own homes because every flat was bugged and there were files on everybody.

Things are better than they were; but they still have not got democracy and people are still spying on each other, betraying each other. Nothing has changed. Two lovers talk in code, pretending they are talking about art, and foolishly think they will not be caught out.

What is dad (Paul Wyett) doing in secret and who will dare to confront him and find out?

Can the eldest boy (James Musgrave) avoid national service with a bribe to the local doctor? And how many more times will the Englishman (Alex Large) put his foot in it?

Donkey Heart is flawed and may not work quite as well as it should in the second act, but it is still worth seeing. The play is well directed by the author’s sister, Nina Raine, who has assembled a fine ensemble, which also includes Emily Bruni, Amanda Root and 11-year-old Pierre Atri.