A PENSIONER has showed it is never too late to learn after she received her third degree aged 91.

Patricia Bishop, is one of Britain’s oldest graduates after initially finishing her first Bachelors degree, 70 years ago. 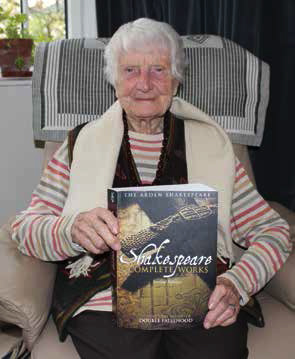 Clever-clogs Patricia graduated with a degree in Psychology in 1945 from Bedford College for Women, and earned her second degree, in English, six years ago. Before she went back to the books, Patricia led a fulfilling career in clinical psychology, working with young people and their families in prisons and disability services, before she retired aged 80.

On Wednesday, she was commended for her latest degree, a Masters in Shakespeare and Contemporary Performance, at a formal graduation ceremony at Birkbeck University in central London.

The grandmother-of-two said: “of course I was one of the older ones, but most people were in their 20s and 30s which was nice.

“I have always worked with young people as a psychologist and so I liked that about the classes.

“In fact the contact with people from different backgrounds and with younger minds was most enjoyable and refreshing.

“It was good for my morale that younger students often told me that they found my enthusiasm and effort a source of encouragement.”

During her Masters, Patricia watched more than 30 performances of Shakespeare’s work at the Globe Theatre, exploring how the plays are still meaningful without understanding the language.

In the space of six weeks the student, who studied at Birkbeck University of London, watched 37 Shakespeare plays, at one point watching three performances in a single day.

Patricia, from Archway, north London, said: “although I have been writing reports for years, it’s quite different writing an essay conveying your thoughts on literature.

“To explain one’s enjoyment and to relate it to others’ ideas on the subject is the challenge, but very rewarding as one begins to achieve it.

“I really did become something of a fixture at the theatre.”

While the 91-year-old isn’t looking to study another degree for some time, she revealed the key to success is learning to focus.She added: “I would say go for it, choose what you really want to study or learn more about and to succeed you need to learn to focus.”

She added: “I would say go for it, choose what you really want to study or learn more about and to succeed you need to learn to focus.”