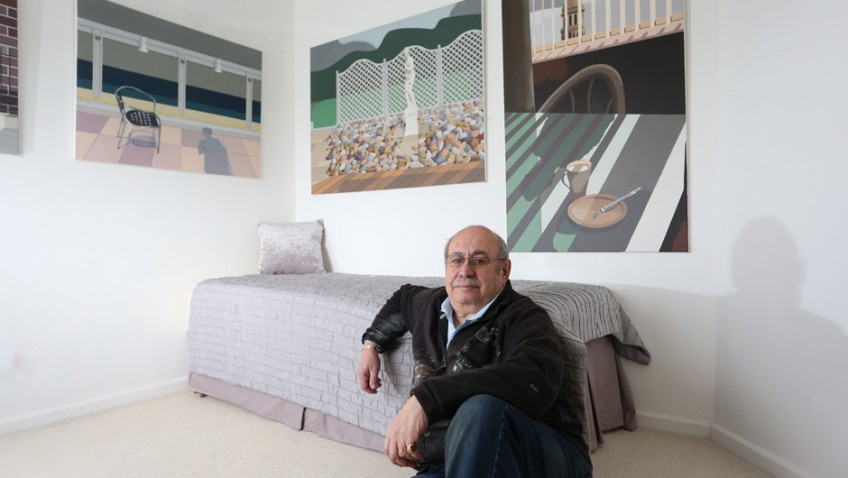 A budding painter has opened up his home to the public after transforming his living room and bedroom – into an ART GALLERY.

Retired teacher David Supper, 62, is displaying 30 of his best pieces of artwork across his home in a bid to generate interest in his paintings.

He taught secondary school pupils for 30 years and only started painting professionally six years ago.

The talented artist has already exhibited some of his pieces at the Driffold Gallery in Sutton Coldfield, West Mids., and Thompson’s Galleries in London.

But now he is opening up his own home in West Bridgford, Nottingham, to members of the public after transforming the rooms into a makeshift gallery.

The paintings – valued between £1,670 and £3,350 – include depictions of the Brisbane Sound and Light Festival, the Donald Judd Museum in Texas and the Bronze Sculpture in Israel.

Yesterday (Wed) David said: “People will be able to see the paintings in situ and this helps them get a feel of what it would look like in their house – and I think that’s really important.

“There will be no pressure and if people want to they will be able to commission me to create a piece of art for them.”

He describes his work as being “hard-edge realism” and takes his inspiration from the world around him, building up colour layer by layer.

He added: “I see the world in a particular way – some things jump out at me and I convert them into paintings. “I am fairly liberal with the truth. I don’t pain a scene, I make a composition based upon a scene.”

David’s wife Bryony, 62, who encouraged him to start showcasing his work in galleries, said: “I’ve always believed in his work.

“David would never have dreamt of calling the press or trying to get his work in galleries because he’s always in his studio with his head down.”

The gallery will be officially opened in May and people will be able to visit by appointment only.