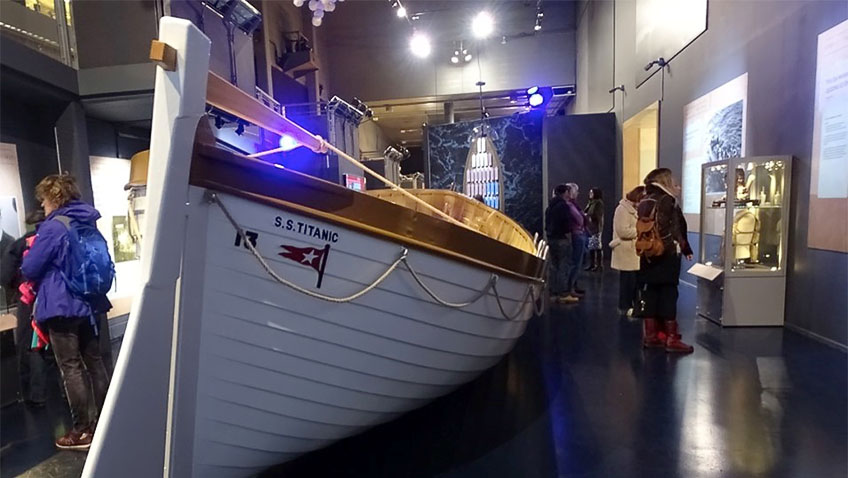 Out & About – around the UK

Reappraising many of the myths, controversies and assumptions that still linger around the sinking of the Titanic, this exhibition presents rare objects and personal testimonies.

Offering new contextual information around the sinking of the Titanic in 1912 and what happened next, Titanic Stories brings together never-before-seen items as well as the personal stories of many of the survivors and victims, and their descendants.

The exhibition also offers an exploration of how the tragic event was quickly commodified and commercialised, and includes souvenirs produced within days of the disaster to music, film and contemporary ephemera and artefacts. It looks at cinema adaptations including a propaganda film and the award-winning A Night to Remember (1958), each represented by their original film posters and production stills, while items from James Cameron’s 1997 blockbuster include props and one of Kate Winslet’s costumes.

In addition to the many historic objects on display, the National Maritime Museum Cornwall is commissioning a number of large-scale installation pieces, including an exact, life-size replica of Lifeboat 13, made by specialist boat builders in Falmouth.

Four Corners of One Cloth: Textiles from the Islamic World

Drawn from the Whitworth’s collection, textiles are brought together from Syria, Iraq, Turkey and Yemen.

At the heart of the exhibition is a section of Kiswa cloth. The Kiswa covers the Ka’bah – the building at the centre of Islam’s most important mosque – and is replaced each year during Hajj (pilgrimage to Mecca).

Positioned in the direction of Mecca, the Kiswa section is visible from the very front of the Whitworth, drawing visitors in. Surrounding it are burnished indigo, silk embroidered robes, tent hangings and Dervish hats stitched with script.

Discover one of the best collections of gloves in the world – The Glove Collection of the Worshipful Company of Glovers of London, cared for and housed at the Fashion Museum.

This exhibition features exquisite examples of historical gloves from the past 400 years, many of which have never been displayed to the public before.

Highlights include beautiful embroidered gauntlet gloves from the 1600s, a curious pair of gloves in a walnut shell from the 1830s, and the Duke of Edinburgh’s carriage-driving gloves.

The exhibition also touches on outer space with a Soviet cosmonaut’s glove and a costume glove from the Star Wars film The Empire Strikes Back.

Discover the work of a young Dante Gabriel Rossetti before he helped establish the Pre-Raphaelite Brotherhood.

Already filled with Pre-Raphaelite art thanks to the enthusiasm of the Mander family during the mid-20th century, Wightwick Manor now presents an exhibition of drawings by Dante Gabriel Rossetti from his early career.

More than 20 of these pictures will be on display to the public for the first time. The exhibition explores the young Rossetti’s work before he helped establish the Pre-Raphaelite Brotherhood, his interest in literature and his developing style.

All of the drawings are from between 1844-48, when Rossetti was still a teenager and receiving his art education. Many illustrate the preoccupations of a young man, what he was reading, the gothic macabre and ladies of questionable virtue.

Celebrated as one of England’s finest equestrian painters, Sir Alfred Munnings forged much of his early reputation as a brilliant war artist.

Serving in eastern France with the Canadian Expeditionary Force in 1918, Munnings sketched and painted landscapes, battle scenes and horses to document life on the fighting front and the vital logistical work taking place behind the lines.

For the first time in 100 years, 41 wartime paintings by Munnings are returning to the UK on tour from the Canadian War Museum, Ottawa. In this once-in-a-lifetime display at his former home, Castle House in Dedham, the paintings will be shown side by side with the surviving sketchbooks that inspired them. This is the first time these sketchbooks have ever been on public display together with the finished pictures.

The exhibition follows a series of distinct themes, including the aftermath of war, the logistics of conflict, bravery and, of course, horses. The exhibition also juxtaposes the mundanity of life behind the lines in paintings such as A Grey Team, and Forest of Dreux with doomed gallantry, as so vividly depicted in Charge of Flowerdew’s Squadron.

The Western Front is often associated with the terrible conditions of the Somme, but Munnings was also able to encapsulate the strange beauty and apparent quietude of scenes where the war had wrought its damage and moved onwards, in works such as Ruined Chateau at Ennemain, near Athies.

More than 150 other works by Munnings – from his boyhood sketches, through his early commercial work, to his iconic horse paintings – will also be on display throughout Castle House at the same time, offering a complete survey of his life and development as an artist.

This exhibition of the art of Augustus John looks in detail at his work, particularly in the decades between the two world wars.

At his peak, John’s reputation as one of the towering figures in British art was based upon his extraordinary talent, both as a draughtsman and portraitist, as well as his bohemian lifestyle.

Drawn from Life is a celebration of John’s contribution to British art of the 20th century and the opportunity to marvel at his extraordinary use of line, colour and form to create art of timeless beauty. With works drawn from a wide range of museums and galleries, including the National Portrait Gallery and Tate, as well as from private collections around the UK, this exhibition is a comprehensive retrospective of a great British artist.

The exhibition represents a partnership between Salisbury Museum and Poole Museum, under the umbrella of the Wessex Museums Partnership, supported by Arts Council England. Poole Museum will be showing Henry Lamb: Out of the Shadows from 18 May – 29 September, 2019.

Explore Queen Victoria’s private life behind her carefully managed public image in this major exhibition marking the 200th anniversary of her birth.

Victoria learned that she was to become Queen when she was 18 years old, while still living at her childhood home of Kensington Palace. She held her first council meeting in the palace’s Red Saloon just a few hours later.

The exhibition re-introduces Victoria as a young woman and explores her roles as a queen, wife, mother and empress. Rare survivals from her private wardrobe – including a simple cotton petticoat and a pair of fashionable silver boots – provide a stark contrast to the black gowns she was so famous for wearing later in life.

The display will also explore Victoria’s complex love affair with India, from the story behind the Koh-i-noor diamond to her friendship with the deposed Maharajah Duleep Singh. Examples of her personal diaries carefully inscribed in Urdu will form a centrepiece of the exhibition.